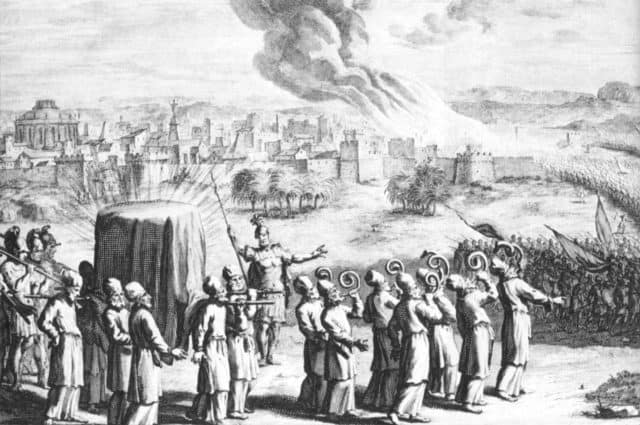 This Shabbat marks the twentieth of Iyar, an important date in Jewish history. No holiday marks this date and its significance is generally unknown.

What then happened on the twentieth of Iyar? Numbers 10:11 notes that after a year and 20 days at Sinai—a period encompassed by the last 22 chapters of the book of Exodus, the entire book of Leviticus, and the first 10 chapters of Numbers—the cloud of glory ascended from upon the tabernacle, signaling that it was time for the Israelites to break camp and travel towards the Land of Canaan.

But it also set the stage for a great failure. Immediately after the two verses describing the movement of the Tabernacle at the center of the camp and the dispersal of Israel’s enemies before it (Numbers 10:35-36), we learn of a series of occasions when Israel challenged its human and divine leadership, which peak at the sin of the scouts. This “evil” generation (Numbers 32:13) was then doomed to wander and die in the wilderness over the next 38-plus years. “Plan A” had been for the generation of the Exodus to conquer and settle the Land. In the end, Israel would have to settle for “Plan B”—by which their hopes and dreams could be realized only by their children.

These two biblical verses—the first of which is proclaimed in our liturgy when the Torah’s ark is opened—are marked by special Masoretic punctuation marks (the letter “nun” written upside down and backwards) and are described in various traditional sources as constituting a full book of the Torah. Rabbi Menachem Leibtag explains that Numbers effectively constitutes “three books in one:” Book I describes Israel’s “technical and spiritual preparation for the journey”; Book II represents the “ideal manner by which [Israel] were to travel”; and Book III describes “the actual journey.” Ramban and other commentators cite a midrash that describes the problem in a highly resonant way: as soon as the Israelites left Sinai, the people ran away “like children running from school.” The moral standards set at Sinai were just too high to bear.

But what is the significance of the twentieth of Iyar? Why was it important for the Torah to record this date when so many other dates go unrecorded by the Torah? And, why did Israel break camp and set out for Israel on this date specifically?

In chapter 4 of his recent book, Zakhor ve-Shamor: The Meeting of Nature and History in the Sabbath and Festival Calendar, Rabbi Yoel Bin-Nun presents an intriguing theory. His approach links several astute observations about timing and dates that are mentioned in Numbers and Deuteronomy. In particular, Bin-Nun suggests that the significance of the twentieth of Iyar becomes clearer when we consider Moses’s enigmatic words in the opening of Deuteronomy.

A longstanding puzzle is why the narrator’s preamble notes (Deuteronomy 1:2) that Israel’s encampment on the Plains of Moab (Transjordan) is just “11 days from” “Horeb”—i.e., Sinai. This statement seems intended to pour salt on Israel’s wound: whereas they wandered for more than 38 years, it could have only taken them 11 days. Yet, Bin-Nun suggests that Moses is hinting at something more precise: had the camp started on the twentieth of Iyar and walked for 11 days, it would have arrived at the Land on the first day of the third month, which would have been the anniversary of their arrival at Sinai (Exodus 19:1).

This in turn is significant given that the plan of the Exodus was first laid out by God at the moment of Israel’s deepest subjugation in Egypt—i.e., when Pharaoh rebuffed Moses and Aaron’s request to “let the people go” and instead instituted a regime that was designed to kill Israel’s spirit. God responds (Exodus 6:2-8) by declaring His intention to intervene in history to save the people and He lays out a plan for how the Exodus process will proceed.

This plan has a double climax to it (Exodus 6:7-8) (a) that God would “take [Israel] for [Himself] as a people, while [He] will be a guide for [Israel]; and [Israel] would know that [God] is responsible for taking [Israel] out of Egypt;” and (b) that God would “bring [Israel] to the land that [God] had raised His hand to give it to Abraham, Isaac, and Jacob; and He would give it to [Israel] as an inheritance.” In short, the double climax is one of the giving of the Torah at Sinai; and of the provision of a land in which Israel faced the challenge of fulfilling the Torah.

Bin-Nun suggests that each of the two climatic stages was originally meant to follow one another exactly one year apart: just as the arrival at Sinai was on the first day of the third month, the arrival in the land was meant to occur on the one-year anniversary of Sinai, thus providing a powerful symbol of how law and land are the twin foundations of Israel’s covenantal project.

Arriving as it does several days after the first of third month, the holiday of Shavuot marks this twin climax. While the thematic connection to the land is explicit in the Torah (Exodus 23:16, 34:22; Leviticus 23:9-22; Numbers 28:26; Deuteronomy 16:9-26:1-11), the calendrical connection to the land is not. Conversely, while the thematic connection to Sinai is not explicit in the Torah, the calendrical connection is present in the reference to the third month (if ambiguous as to the specific date). But if we follow Bin-Nun’s suggestion and consider that the people were meant to arrive in the land on the anniversary of the arrival at Sinai, thematic and calendrical links would then both be strong.

Bin-Nun supports his thesis in three notable ways. First, he identifies two otherwise puzzling events in year 2 that echo year 1: a reenactment of Passover, both at the anniversary of the Exodus and even in the second month—just six days before the departure on the twentieth of Iyar (Numbers 9:1-14); and the departure of a member of Jethro’s family at the cusp of the third month (compare Numbers 10:29-32 with Exodus 18:1-27).

Second, Bin-Nun notes two key occasions when the text implies that Israel has become delayed because of its sins: (a) when God declares (Numbers 11:20) that the people’s lust for meat would lead them to eat quail for “thirty days, until it comes out of [their] noses;” and (b) when the Torah goes out of its way to tell us that the scouts were sent to assess the land during the period when the first grapes are harvested (Numbers 13:20). The former verse implies that they were delayed by at least a month, whereas the second verse—given that Israel’s grape harvest occurs in the fall—suggests a delay of a few months. The implication is that Israel had already fallen off the ideal schedule in the period leading up to the sin of the scouts.

Finally, Bin-Nun notes there are many echoes of Sinai in the events upon their arrival in Israel in the book of Joshua. Several of these are reenactments of key events of the Exodus: Joshua’s encounter with an angel that evokes Moses’s initial encounter (compare especially Joshua 5:15 with Exodus 3:5); the crossing of the Jordan; and a mass circumcision ceremony, as a prelude to the first celebration of Passover since that of Numbers (cf. Exodus 12:48).

Moreover, whereas the encounter with the angel comes last and thus seems out of order, it is a fitting prelude to a Sinai-themed event since Moses’s encounter was Israel’s first visit to Sinai. The Sinai-themed event in question was the conquest of Jericho, whose elements included shofar blasts; limits on approach; seven days, and more.

Bin-Nun’s approach is compelling for several reasons. First, he resolves several puzzling verses— Why does Moshe go out of his way to tell us how far it is from Horeb? Why should we be concerned that it was the grape harvest?

First, and building on Leibtag’s conception of the three books that comprise Numbers, Bin-Nun helps reconcile a deeper and longstanding puzzle: Why are the events in the first “book” of Numbers dated whereas there are no dates in the third “book,” at least not until the very end? This is very odd when you think about it. After all, there is little narrative in the first “book” and so the order of events is relatively unimportant. But because each of the events in the third “book” is modular and undated, we have no clear way of knowing when they occur. Most notably, this means that we have no clear way of knowing when the events of the second year end and the events of the fortieth year begin. There exists a tradition that the fortieth year begins with the people’s arrival in the Wilderness of Zin and the death of Miriam (20:1). Still, it begs the question of why the dates are not mentioned explicitly.

In short, temporal order becomes very murky after Israel leaves Sinai, and it is unclear why.

Bin-Nun’s approach suggests how we might resolve this puzzle. In short, after Israel has sinned, the calendar no longer matters. Because of their failure to live up to the standards of Sinai, Israel falls behind the idealized schedule. And given that, it is no longer so important when the various events occur. The absence of the dates and the temporal confusion more generally is a powerful textual signal of the fact that Israel has fallen short of Sinai ideals.

Note finally that this breakdown in the temporal organization between the first “book” of Numbers (and the preceding book of Leviticus) and the third “book” parallels the breakdown in Israel’s social organization: from a well-organized camp and hierarchy, we get increasing contestation and disorganization.

A second lesson is methodological: Bin-Nun is sensitizing us to the fact that we should read the Torah not just for the explicit narrative that is given but for hints of what might be called “theological counterfactuals:” ideal narratives that would have occurred had the protagonists behaved as they should have. One might be skeptical if this were the only such case. But recently, Rabbi David Fohrman has convincingly argued that the text hints at such a theological counterfactual in the case of the Exodus: “Plan A” was for Egypt to recognize God as creator of the world, but Pharaoh’s vanity in the aftermath of plague 7 necessitated “Plan B” whereby the truth of monotheism would be recognized via Egypt’s destruction. And I have recently indicated how the series of contrasting parallels by which the Sale of Joseph may be related to the “well scenes” of Isaac-Rebecca, Jacob-Rachel, and Moses-Zipporah hints at a theological counterfactual, whereby sibling rivalry did not lead to exile and slavery.

Finally, it seems important to ponder why such theological counterfactuals are embedded in the text. One possibility is that they impart the lesson that although we may repeatedly fail to realize the ideal relationships with God and with our fellows, they remain our salient aspiration. Otherwise, why tell us about such ideals? Indeed, the set of parallels between Sinai and Jericho identified by Bin-Nun are perhaps the most telling in this regard. The Bible could have hinted at the theological counterfactual merely by including the elements in the second year that echoed the first year, together with the indications that the idealized schedule had slipped. Including the echoes of Exodus and Sinai in Joshua indicate something more: that the loftiest ideals were still salient. We are meant to recognize our failures but be inspired by what we could have achieved.