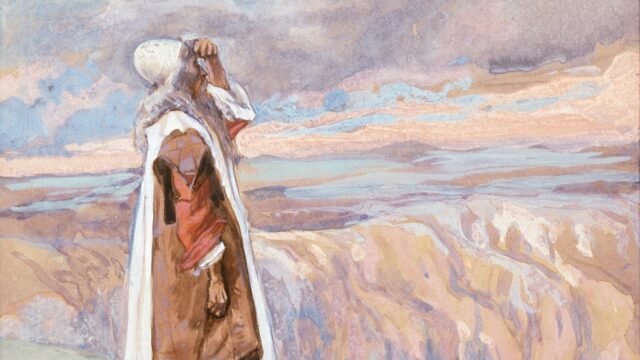 Did Moses see the face of God? Over the course of a single chapter, Parashat Ki Tissa gives what appear to be two contradictory answers to this question. In Exodus 33:11, the Torah declares that God indeed spoke to Moses face to face. Yet a mere nine verses later, after Moses requests to see God’s glory (33:18), God responds that “you are not able to see my face, for no person may see Me and live” (33:20).[1] Which is it? Did Moses see God’s face (as it were) or not?

The answer, I believe, lies in the context of each of these verses. It is after the sin of the Golden Calf. As chapter 33 begins, Moses has convinced God not to wipe out the entire Jewish people, but God still refuses to enter into a real relationship with them again. God will send a mal’akh (angel/messenger) to take the Jewish people into the land of Canaan and fulfill His promise to our forefathers but will not be involved directly (33:2-3). Moses is to take his tent and pitch it outside of the camp (33:7), and only there will God engage in direct communication with him. It is only at this point, when Moses separates himself from his sinful nation, that God communicates with Moses “face to face.”[2]

But Moses refuses to accept this solution. Unflinchingly committed to the Jewish people, he insists that God accompany the Jewish people directly into the land of Canaan (33:15-16). God ultimately assents (33:17). It is then that Moses asks to see God’s glory, and God denies the request, “for no person may see Me and live.”

Rabbi S.R. Hirsch (on Exodus 23:20) offers a striking interpretation that leads us to a profound appreciation for the sacrifice that Moses made. Hirsch asserts (on the basis of Vayikra Rabbah 1:1) that the mal’akh referred to here―who would have accompanied the Jews into Canaan―is none other than Moses himself. It is not a stretch to say that mal’akh refers to a prophet. There is ample precedent for the word simply meaning messenger, not necessarily a celestial being. Yet Hirsch’s comment may be more insightful than he intended. Moses is not entirely of this world. He is, in some sense, a celestial being. “He was there with God forty days and forty nights; he ate no bread and drank no water” (Exodus 34:28). No person may see God’s face. But Moses, the angelic being, could.

Yet Moses refused to live a solitary, angelic existence. He refused to stay up on the mountain, even metaphorically. He would not have a relationship with God that precluded the Jewish people’s relationship with God: “If you do not forgive their sin, erase me from Your book that You have written” (Exodus 32:32). God gives Moses the opportunity to lead the Jewish people and work to rehabilitate their relationship with God. But, this comes at a cost. When Moses asks again to see God’s glory, he is told, “No person may see Me and live.” If you choose to live among the people, to be a leader of human beings, God explains, your relationship to Me is tied up with theirs. You can no longer experience the pure angelic intimacy you once did.

The issue of Moses seeing God’s face resurfaces at the end of his life. Deuteronomy tells us, “There will never arise another prophet like Moses whom God knew face to face” (34:10). Bava Batra 15a and Menahot 30a record a debate as to who wrote the last eight verses in the Torah. Rabbi Shimon is of the opinion that Moses himself wrote them be-dema, which Rashi (Menahot 30a s.v. mi-kan va-eilakh) understands to mean “with tears in his eyes.” What was it about writing these eight verses that brings Moses to tears? It could be the simple fact that he is recording his own death, but perhaps there is more to it than that. He is not merely recording his own death; he is reading God’s epitaph to his life. Forty years prior, he gave up the opportunity to see God face to face in order to enable the Jewish people to have a relationship with God. He now reads that the thing he will be remembered for is being the one person who, for that one moment in history, saw God face to face. I believe part of what R. Shimon is getting at is that, forty years later, Moses is still not sure if he made the right choice.

Moses’s anguish is even more poignant when one considers God’s last words spoken directly to Moses: “This is the land that I swore to Abraham, Isaac, and Jacob saying, ‘To your seed I will give it.’ I have shown it to you with your eyes, but you shall not cross into” (Deuteronomy 34:4). If Hirsch is right, Moses could have gone into the land of Israel. He could have gone in as God’s mal’akh. But he did not want to go in as God’s mal’akh. He wanted to go in as leader of God’s people, and in that mission he did not succeed. As he records his own epitaph, he is reminded of the choice he made forty years earlier that ultimately cost him the opportunity to enter the Promised Land. As he learns that what he will be remembered for is what he accomplished before that fateful choice, he sits in tears, wondering if he made the right decision.

A midrash in Sifrei (Devarim 341) may be making this same point. It records that when God told Moses he would not be the one to lead the Jewish people into the land of Canaan, Moses requested to step down as leader and enter as a private citizen. In putting such a request in Moses’s mouth, the midrash is picking up on the idea that Moses knew it was his choice to be leader of the Jewish people that ultimately prevented him from realizing his dream of entering the Promised Land. Upon realizing his failure as a leader, he seeks to undo that choice, to go in not as a leader, but as an individual enjoying his private communion with God. But God informs him there is no going back.

Our understanding of why Moses’s choice was irreversible may be deepened by understanding what it means to “see God’s face.” What is it that Moses so desperately wanted to see when he asked God, “Show me your glory”? Berakhot 7a asserts that it is tzaddik ve-ra lo (why bad things happen to good people). It supports this idea with the verse (Exodus 33:19) where God tells Moses, “I will have compassion upon those whom I have compassion; I will have mercy upon those whom I have mercy.” God, in other words, is telling Moses that he can never have a total understanding of how divine providence works in this world, by what criteria God decides who gets compassion and mercy and who does not. With a global understanding of how divine justice and providence work, perhaps Moses would have known that the generation of the Golden Calf was destined not to make it into the Promised Land. He would have known from the very beginning that a choice to lead them and work to repair their relationship with God was a choice to give up on the Promised Land for himself as well.[3] But God did not permit him this foreknowledge. Like all human beings, he had to make a choice without full knowledge of the consequences.

Did he make the right choice? Was the Jewish people’s failure to enter the Promised Land fated from the beginning, or was it a failure of his leadership? As Moses reads his epitaph, he is reminded that he forfeited the opportunity to know this.

He goes to his grave not knowing if he made the right choice. Ultimately, neither do we.

[1] Biblical translations are my own.

[2] Numbers 12:8 says that Moses gazed on God’s temunah, but the commentaries there all assume that this is something less than seeing the face and is equivalent with seeing the back side as described in Exodus 33:23.

[3] Cf. Midrash Tanhuma Hukat 10, which asserts that the fate of a shepherd and the fate of his flock are intertwined.