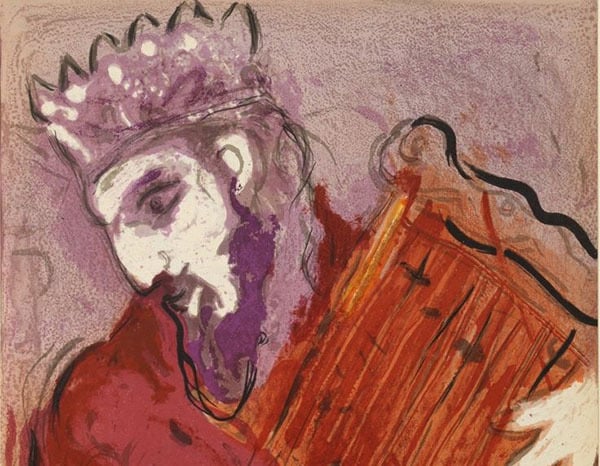 The Holy One, blessed be He, sought to make Hezekiah the Messiah, and Sennacherib—Gog and Magog. The Attribute of Judgment remonstrated with the Holy One, blessed be He: “Master of the World, If You did not make David, King of Israel—who recited several songs and praises before You—the Messiah, then Hezekiah—for whom you performed all these miracles and he did not utter a single song before You—You shall make the Messiah? (Talmud Bavli, Sanhedrin 94a)

In this legend of the Talmud we are told that King Hezekiah had all the makings of the Messiah but one—his failure to utter a song of thanksgiving. It would have been appropriate at the time of the miraculous deliverance of Jerusalem from the siege of Sennacherib, the King of Assyria, to compose a paean of praise to the Almighty in recognition of this momentous event. Failure to set the victory to song was deemed an offense so grievous that it disqualified the otherwise righteous king from a Messianic role. This is the simple interpretation of the passage in the Talmud. But might it tell us something deeper, more essential about the character of the long-awaited Messiah?

In Plato’s Republic, the ruler of the ideal state will be a philosopher. In that tract, Plato takes advantage of the opportunity to express his utter disdain for poets in his famous statement: “There is an old quarrel between philosophy and poetry” (Republic, 607b5-6).

The greatest Jewish philosopher of the medieval era, Moses Maimonides was also dismissive of poets. In a response to Rabbi Jonathan Hakohen of Lunel, Maimonides wrote that “the way of ‘the poets and the poetesses’ (ha-sharim ve-ha-sharot) is not right in my eyes.” (The Hebrew phrase, “ha-sharim ve-ha-sharot,” is a quote from II Chronicles 35:25.) Maimonides’s sensibilities were offended by the ambiguities (“the riddles and the parables”) of poetry. His correspondent Jonathan had written him a lengthy epistle gushing with the panegyric then in vogue in Provence. Maimonides was put on the spot. Mentioning the fact that his former colleagues back in Sefarad were wont to write in rhyme, and invoking the adage “When in Rome, do as the Romans do,”[1] Maimonides responded in kind, and one must say, his own verse does not lag behind.[2]

In his Commentary to the Mishnah, Maimonides grouped “books of poetry” (without differentiation) together with “those books found among the Arabs…that are devoid of wisdom or practical avail, just a waste of time.” (The roster of trashy literature includes “chronicles, customs of the kings and genealogies of the Arab tribes.”)[3]

Later in that same work, remarking upon the sage’s advice, “All my days I grew up among the wise men and I found for the body no good but silence,” Maimonides launches into a lengthy classification of the types of poetry:

Know that the poems that are composed in any language are classified solely by their topics … I need to explain this—though it is simple—because I observed that if the great and pious of our nation are invited to a banquet or wedding or the like, and someone desires to sing in Arabic—even if that song be in praise of strength or willpower (which is desirable) or in praise of wine—then they put up a vocal protest and do not allow it to be heard. [On the other hand,] if the singer sings one of the Hebrew poems, no one protests. They see nothing wrong with that, though the contents be forbidden or reprehensible. This is absolute folly, for what makes speech forbidden or permitted, desirable or repugnant, is not the language in which it is expressed, but rather the content. If the content of the song is exalted, then it is obligatory to say it in any language; and if it is inferior, then it should be avoided in any language.[4]

Finally, in his philosophic work, Guide of the Perplexed, Maimonides took a jab at the poets who allow themselves unwarranted liberties by ascribing human attributes to the divinity.[6]

Given Maimonides’s dim view of the poet, it is hardly surprising that what defines the Messiah in Maimonides’s Hilkhot Melakhim (Laws of Kings) is first and foremost his study of Torah: “If there should arise a king of the House of David who studies the Torah and performs the commandments as David his ancestor.”[7]

In Hilkhot Teshuvah (Laws of Return), Maimonides fleshes out the personal attributes of King Messiah, endowing him with wisdom greater than that of Solomon, and prophecy approaching that of Moses:

That king that shall arise from the seed of David, shall be a master of wisdom greater than Solomon, and a great prophet approaching Moses our Teacher, and therefore he shall teach the entire people and instruct them in the way of the Lord, and all the nations shall come to hearken to him, as it says: “And it shall be at the end of days, the mountain of the House of the Lord shall be established at the head of the mountains” [Isaiah 2:2].[8]

It should not come as a shock that undoubtedly one of the most imaginative of charismatic teachers, the master storyteller Rabbi Nahman of Breslov, greatly enhanced Maimonides’s depiction of the Messiah. In some respects their Messianic scenarios tally, but in other respects they diverge widely.

For two centuries, the contents of Rabbi Nahman’s prophecy concerning the Messiah were kept secret within the confines of the Breslov community. In the recently released Scroll of Secrets (Megillat Setarim), wherein Rabbi Nahman paints a vivid picture of the future redeemer, we read that the Messiah “will be accepted as the halakhic authority throughout Israel” (starting at age twelve!).[14] Thus the Messiah is well within Maimonides’s framework of “studying Torah.” Or, as Rabbi Nahman puts it: “He begins to scrutinize the Torah until he attains deep insights.”[15]

Not all of the Messiah’s day will be devoted to fielding “she’elot u-teshuvot” (questions of Jewish Law). “The daily schedule” will include “an hour in which … he will practice contemplative religious introspection” (hitbodedut).[16] Even that is not revolutionary from the Maimonidean perspective. Maimonides had prescribed solitude and contemplation as part of the daily regimen.[17]

However, beyond the scholarly and introspective side to Messiah’s personality, Rabbi Nahman has restored his musical ability:

And he will make new musical instruments and songs, for his genius in song will be very great. He will innovate in this art such that the souls of those who hear his songs will faint.[18]

The Sages may have been as contemptuous of Homer as Plato (though for perhaps different reasons), but that did not prevent them from envisioning the ruler of the future Hebrew republic as poet in addition to Teacher of the Law.[19]

As we have seen, Maimonides’s role model for the Messiah was King David. The Midrash Tehillim has David praying “that men not read his words [i.e. the Psalms] as they read the books of Homer, but read them and study them so that they receive reward for them as they would for studying Nega‘im and Ohalot (titles of two tractates of the Mishnah).”[20]

Let us return to King Hezekiah. Hezekiah is portrayed by the Sages as an unequalled disseminator of Torah:

He stuck a sword at the entrance to the study house and declared: “Whoever does not engage in study of Torah shall be stabbed by this sword!”

[Subsequently,] they inspected from Dan to Beer Sheba and found no ignoramus; from Gevat to Antipras and found no lad or lass, man or woman, who was unfamiliar with the laws of purity and impurity.[21]

Yet this truly amazing accomplishment, the phenomenal propagation of Torah study, was deemed insufficient when deciding Hezekiah’s final status as Messiah. Though missing from Maimonides’s Laws of Kings (Hilkhot Melakhim), a definite desideratum of King Messiah is that he be an accomplished poet.

[3] Moses Maimonides, Commentary to the Mishnah, Sanhedrin 10:1 (Kafah edition, 140-41). In his note, Rabbi Yosef Kafah writes that it is known that Maimonides was not an aficionado of “the poets and poetesses” (understatement) and refers the reader to Pe’er ha-Dor, no. 41. Published in Amsterdam in 1765, Pe’er ha-Dor is an early arrangement of Maimonides’s responsa. Perhaps ironically, Rabbi Kafah would later impugn the ostensible exchange between the sages of Lunel and Maimonides. Thereupon, Rabbi Yitshak Shilat took up the cudgels on behalf of the responsa to the sages of Lunel, defending their authenticity. See Sefer Zikaron le-Harav Yitshak Nissim, ed. Meir Benayahu, vol. 2 (Jerusalem, 1985), 235-52, 253-56. For further reading on Maimonides’s attitude toward poetry, see: H. Schirmann, “Maimonides and Hebrew Poetry” (Hebrew), Moznayim 3 (1935): 433-436; Yosef Tobi, Between Hebrew and Arabic Poetry: Studies in Spanish Medieval Hebrew Poetry (Leiden: Brill, 2010), 422-66 (“Maimonides’ Attitude Towards Secular Poetry, Secular Arab and Hebrew Literature, Liturgical Poetry, and Towards Their Cultural Environment”).

[9] Moses Maimonides, Guide of the Perplexed II, 13 (Pines translation, 283). Inter alia, young Josef Solowiejczyk originally planned to write his doctoral dissertation at the Friedrich-Wilhelms-Universität of Berlin on the topic of “Maimonides and Plato,” to demonstrate that Maimonides had been misconstrued as an Aristotelian, but unfortunately could find no Doktorvater to sponsor the project. See Aharon Lichtenstein, ״R. Joseph Soloveitchik״ in Great Jewish Thinkers of the Twentieth Century, ed. Simon Noveck (Clinton, Mass: B’nai B’rith, 1963), 285.

[14] Zvi Mark, The Scroll of Secrets: The Hidden Messianic Vision of R. Nachman of Breslav (Brighton, Mass.: Academic Studies Press, 2010), 55. Rabbi Nahman’s vision of the Messiah as a “moreh hora’ah” (halakhic authority) may have been inspired by the portrayal of King David in rabbinic lore. See Talmud Bavli, Berakhot 4a.

[18] Mark, 59. Though Rabbi Nahman himself may have expressed reservations concerning the medium of poetry, “bottom line” he did bequeath to us a single magnificent poem, Shir Na‘im. Rabbi David Sears viewed the poem as a summation of Rabbi Nahman’s teachings over the course of a lifetime. See Rabbi Nachman of Breslov, Shir Na‘im/Song of Delight, trans. David Sears, especially pp. 115-17 (“Rabbi Nachman and Poetry”).

[19] See Mishnah Yadayim 4:6; commentary of Hai Gaon ad locum; and discussion in Saul Lieberman, Hellenism in Jewish Palestine (New York, 1994), 105-14. Unlike the Gaon who read in the Mishnah “Homeros,” Maimonides read “Miram,” for which he supposed a Hebrew derivation. (See Kafah ed., 442-43.) This is less baffling than Maimonides’s acceptance of an Aramaic provenance for “Epicurus” in Mishnah Sanhedrin 10:1 (Kafah ed., 140). Cf. Rashi, Sanhedrin 99b, s.v. megaleh panim ba-torah.