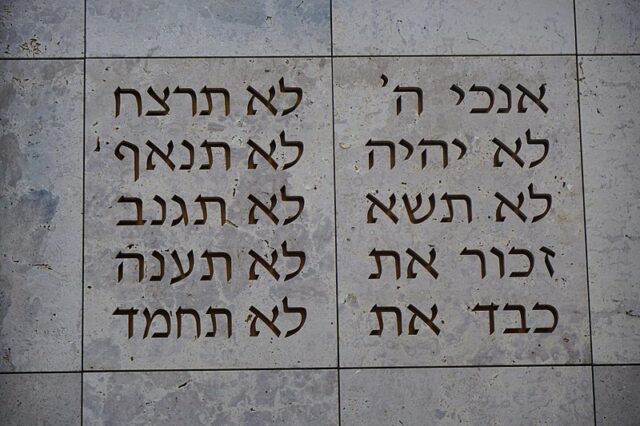 The Ten Commandments are found in both Parashat Yitro and Parashat Va’ethanan, but there are differences between the two versions. One major difference occurs in the tenth commandment. In Parashat Yitro (Exodus 20:14), this commandment uses the language of lo tahmod throughout the verse, while in Parashat Va’ethanan (Deuteronomy 5:18) the phrase lo tahmod is used vis-à-vis one’s neighbor’s wife, but lo tit’avveh vis-à-vis the rest (house, field, servants, etc.). What is the difference between these two verbs?

A well-known suggestion for a distinction is found in Midrash Ha-Gadol to Yitro. The suggestion there is that ta’avah is be-lev (with the heart), while himmud is be-ma’aseh (with deed).[1]

This distinction is adopted by Rambam and many others. Regarding Rambam, see, for example, his statements in Sefer Ha-mitzvot, Negative Precept 265: “This means therefore that once you let yourself covet in your mind a desirable object that you have seen in your friend’s house you have violated the precept of lo tit’avveh. If your passion for the object becomes so intense that you take steps to acquire possession of it, pressing him to sell it and exchange it for something better or more valuable—once you have bought out the unwilling purchaser you have violated both prohibitions.”[2] See also Rambam, Hilkhot Gezeilah Va-Aveidah 1:9-10.

But I would like to present a different distinction between lo tahmod and lo tit’avveh.[3] It has been made by several interpreters, but I would like to present it in the name of Benno Jacob, a Reform rabbi and Bible scholar in late nineteenth-early twentieth-century Germany.[4] He offers it in his article “The Decalogue,” in The Jewish Quarterly Review 14, New Series (1923).[5] I present it in his name because, to my knowledge, he is the only one who focuses on the importance of lo tit’avveh being in the hitpa’el grammatical form.

Then he explains that the desire reflected in a.v.h. is different. “The difference is this[,] that the occasion for חמד is inspection, [but] for אוה imagination, the reference being therefore to imagined estates and pleasures…”[6] The body part doing the a.v.h. is usually the nefesh, not the eyes. Here he cites Deuteronomy 12:15, 12:20, 14:26, and 18:6 and many verses from Nakh.[7]

Then he makes his crucial observation that a.v.h. is often expressed in the hitpa’el, as in the tenth commandment.

Why should that be? Many of us have looked at that tenth commandment multiple times and wondered about h.m.d. versus a.v.h., but typically we have forgotten to notice that a.v.h. is in the hitpa’el. The command is not lo te’avveh but lo tit’avveh. What is the import of this hitpa’el form?

One source I have seen counts 984 instances of the hitpa’el in Tanakh.[8] A large percentage, perhaps a majority, of these times, the hitpa’el is a reflexive form, meaning that it indicates that a person is doing something to himself. Let us make the reasonable assumption that this is its function here.[9]

A perfect example of a.v.h. being used in this manner is found in Numbers 11:4-5. In verse 5, the people cry out: “We remember the fish that we used to eat in Egypt for free…” The previous verse had described the background with the phrase hit’avvu ta’avah, and later in verse 11:34 the people are described as ha-mit’avvim. The events are alluded to again in Psalms 106:14: va-yit’avvu ta’avah.

Another example of a.v.h. in the hitpa’el is in Amos 5:18. Here the reference is to ha-mit’avvim et Yom Hashem. No one has ever seen Yom Hashem before. We can understand that this is a dramatic day and something that people would be working themselves up for.

Finally, another example is II Samuel 23:15. Here we have va-yit’avveh David, followed by: “Who will give me water to drink from the well of Bethlehem which is by the gate?” The well was not in his sight. The comment in the Soncino edition explains that he had “a sudden longing for the water he used to drink in his boyhood.”[10] David is here using his imagination and conjuring up his fond memories of drinking water from this well.

Jacob concludes by calling h.m.d. “the covetous observation” and a.v.h. “the imaginary desire.”

Finally, integrally related to the above interpretations of h.m.d. and a.v.h. is Jacobs’ expansive approach to parallelism. He believes that it is wrong for us to be overly narrow and apply h.m.d. only to one’s neighbor’s wife and a.v.h. only to the other items listed in the verse. Admittedly, h.m.d. is mentioned in Parashat Va’ethanan only in connection with the neighbor’s wife, and a.v.h. is mentioned only in connection with the other items. But even if we can suggest a reason for the Torah’s verb choice for each item, he argues for an expansive approach to parallelism which would allow us to apply the prohibition of each verb to all items.

I would like to end on a homiletical note. Long ago, at an event sponsored by an organization promoting aliyah, I heard the following Devar Torah. The land of Israel is called eretz hemdah in birkat ha-mazon, based on the use of the phrase in Jeremiah 3:19, Zechariah 7:14, and Psalms 106:24. Let us assume that we follow Midrash Ha-Gadol and Rambam on the distinction between lo tahmod and lo tit’avveh, such that one has not violated lo tahmod unless one has come into possession of the object. This would imply that the desire alone to live in Israel does not make it eretz hemdah. One has to actually live there in order to bring this description to fruition![11]

[1] Rabbi D. Z. Hoffmann included this passage in his edition of Mekhilta of R. Shimon b. Yohai, published in 1905. This led Nehama Leibowitz (see next note) to cite the passage as deriving from this work. But Mekhilta of R. Shimon b. Yohai is an ancient work that was lost and had to be reconstructed from quotations. Scholars now realize that Hoffmann was overly reliant on Midrash Ha-Gadol in his reconstruction. The later and more conservative reconstruction by J. N. Epstein and E. Z. Melamed, published in 1955, did not include the above passage.

The standard Mekhilta today is referred to as Mekhilta of R. Yishmael. There is a similar but more limited statement there in Parashat Yitro, end of section 8.

[3] Of course, some believe no deed is required for himmud and view both prohibitions as equivalent. See, e.g., Rashi to Deuteronomy 5:18; Sefer Mitzvot Gadol, Negative Precept 158; and Umberto Cassuto to Exodus 20:14. Others view the prohibition of lo tahmod as including both one who takes steps to obtain the object and one who merely desires it. See Da’at Mikra to Exodus 20:14, n. 3.

[6] Others who make the distinction that Jacob makes include Malbim (1809-1879) to Exodus 20:13 (and see also his commentary to Genesis 3:6) and R. Solomon Wertheimer. Wertheimer (d. 1935) writes: “Ta’avah refers to the human desire without benefit of visual contact. Himmud is the stimulation of desire by visual contact…” See his work on biblical synonyms: Be’ur Shemot Ha-Nirdafim She-Ba-Tanakh (Jerusalem: Sinai, 1924) (translation taken from the Leibowitz article; see note 2 above). Leibowitz also discusses the similar view of Jacob. But when she does so she greatly shortens his discussion and does not mention his observation about the hitpa’el. That is what motivated me to write this article.

[7] He admits the exception of Genesis 3:6 where ta’avah is used in connection with einayim. He suggests that the meaning here is that whoever saw or heard about the Tree once would say to himself: I wish I could see it again and again!

[8] Others count fewer. I have seen references to 946, 780, and “over 825.” Due to the ambiguous nature of certain word forms, counting instances of hitpa’el in Tanakh is not an exact science.

[9] Sometimes it has other functions. For example, sometimes hitpa’el expresses a continuing action. Other times, it expresses a request for someone else to do something to you. I have discussed the hitpa’el extensively in my article on the word hitpallel in my Roots and Rituals (New York: Kodesh Press, 2018) and in my earlier article at seforim.blogspot.com on Aug. 29, 2016. In the case of hitpallel, I argued that it denotes a request for someone to intervene on your behalf. I disagreed with the common understanding of hitpallel as an individual acting upon himself (e.g., judging himself). Another case like hitpallel where the hitpa’el serves the function of requesting that another act on you is the case of hithannen. Here, one is asking another to show favor.

[11] I would like to thank Rabbi Avrohom Lieberman for reviewing and improving this article.

Joyful Planting: COVID and the Prohibition of Planting During the Three Weeks

The Difference Between Lo Tahmod and Lo Tit’avveh: An Insight Based...

Can We Cancel Tishah Be-Av? The “Four Fasts” in Light of the...