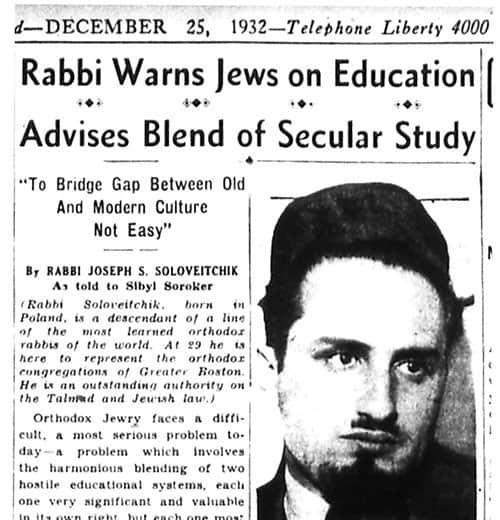 Rabbi Joseph B. Soloveitchik (as told to Sibyl Soroker)

Editors’ Note: In August 1932, Rabbi Joseph B. Soloveitchik arrived in the United States with his young family. See here for a timeline of the Rav’s earliest American sojourn. Several months later, the Rav agreed to be interviewed by two local Boston newspapers. The first was published in the Boston Herald on December 12. The second was a more elaborate vision statement, appear in the pages of the Boston Sunday Advertiser on December 25. At that time, apparently, Rabbi Soloveitchik was not comfortable articulating his views in English. He therefore communicated with the Sunday Advertiser’s interviewer, Sibyl Soroker, in Yiddish or German. Owing to this, some of the Rav’s language is imprecise. In fact, the original article identified him as “Joseph S. Soloveitchik” (this was only change in the version below). Nevertheless, this interview represents Rabbi Soloveitchik’s very first presentation of several educational matters. With the agreement of the Rav’s family members, it is our pleasure to present this rare interview from 1932.

“To Bridge Gap Between Old and Modern Culture Not Easy”

Orthodox Jewry faces a difficult, a most serious problem today, a problem which involves the harmonious blending of two hostile educational systems, each one very significant and valuable in its own right, but each one most essential to the spiritual and mental make-up of the modern Jew.

The study of the Jewish religion—of the Talmud and the Jewish Law—represents a complete culture in itself. The modern secular educational system is another.

Yiddish religious culture and the modern educational culture have no conflicts. They belong side by side; instead, they are separated by a so-called Chinese wall. To penetrate the wall between these two entirely different kinds of culture—to combine them into an ideal oneness—is the problem of orthodox Jews.

A Difficult Problem
Other religions may know the conflict between faiths, but they do not know this type of collision between the old Jewish religious study and the modern scientific study. They are accustomed to a combination of the old tradition and the new methods of training.

Development of the Christian religions was different. It was inevitable that the religious and secular education go hand in hand. But for the Jews, it is a more recent problem and an exceedingly difficult one with which to cope.

In the days of our forefathers, religious study was all-absorbing. The youngsters started to go to their “Cheder” (religious school) at the age of four or five years. From then on, the study of the Talmud and the Jewish laws demanded all their time and attention. It enveloped their very souls. The result?

Strong Secular Movement
There was no time or energy or thought for the study of secular subjects. They came secondary. And when these boys grew to full manhood and then to old age, their old Jewish religious education still absorbed them completely. That is our old orthodox Jew of today.

Within the past half century, however, a strong secular movement has begun to break through this orthodoxy and is making great strides, so that there has arisen the necessity of combining the study of Jewish religion with modern subjects.

The Talmud and the Torah once demanded one’s mind and attention entirely. The new educational system demands time and attention also. One of the two systems must suffer. Obviously, it is the religious study.

A Constant Conflict
The problem, then, is to give our generation of growing boys and girls an all-embracing, well-balanced educational development, one that will include the complete Jewish spiritual education as well as the modern secular training, both to meet side by side on an equal footing, neither one to suffer because of the other. How may this ideal result be effected?

The problem is in itself not yet clear either to the modern Jew or to the orthodox Jew. For this reason, there is a constant conflict between orthodoxy and the modern culture. This struggle is useless; it is fruitless, for they are struggling against the stream of the times. Our Jews must, instead, try to coincide.

Here we have the accumulation through each succeeding generation of two cultures which have traveled along different roads, trod different paths, met different conditions in different countries.

Give World Picture
The modern Jew does not wish to understand the importance to the Jew of the old Jewish culture. He thinks Jewish culture comprises the modern Jewish or Hebrew literature—the study of Bialik or Hirschbein or Sholom Aleichem.

He does not understand that it is not enough—that it involves something essentially deeper—that the old Jewish laws are not merely legal conceptions handed down through the ages, but that they give a world picture of the old Jewish life, of the old Jewish point of view, which penetrates into the inner soul of man and rewards him with that deep spiritual feeling he cannot obtain only from reading Jewish or Hebrew literature. The latter is merely a small part of the whole panorama.

To bridge this gap between the old Jewish culture and the modern culture is not an easy task. It is a task for generations. I have seen Jews try to coincide these two different cultures.

Fault of Background
They seek the spiritual combination, not the mechanical one. And the more thinking Jews suffer within themselves because of this wall which they cannot climb. It is not their fault. It is rather the fault of their background and religious study. It is because the spiritual feeling is not there.

The modern products of Jewish culture are not able to present the old Jewish point of view.

Without the absorbing study of the Talmud and the Jewish Law, they will never be able to answer the question “What is Judaism?” in the true spiritual sense of the word. And the future of orthodox Jewry depends upon this answer!