This week, the Daf Yomi cycle begins Masekhet Eruvin.[1] In this tractate, Rashi’s commentary contains not only words, but many diagrams. This section of Rashi’s comments to Eruvin 9b is a good example: 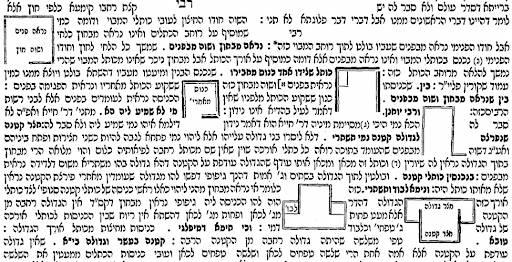 In fact, there are 54 such diagrams in Rashi’s commentary to Eruvin, and they represent about half of the total of diagrams found in Rashi’s commentary to the Talmud. I have been studying these diagrams for the past 10 years, and when I speak to people about it, the first thing they want to know is, “Did Rashi really draw the diagrams that we see today in the Vilna Shas?” The answer I give them is yes, but there are some qualifications. Rashi drew the original diagrams, but they have changed over time. The best place to begin exploring the diagrams is with an illustration from Eruvin 2a, the very first page.

First, some context. In the times of the Mishnah, houses would open up to courtyards which then opened up to an alley which led to the street. The first Mishnah in the tractate speaks about the issue of carrying in an alleyway (mavoi) which is closed on three sides but open on the fourth side to the public domain (reshut ha-rabim). The following picture from Peirush Hai gives one a sense of what this might have looked like:

Since the alleyway is enclosed on three sides and one of those sides is a dead end, on a Torah level (de-oraita) it is considered a reshut ha-yahid (private domain) and carrying within it would be permitted. But the Sages were concerned that since on the fourth side the alleyway leads out to the public domain where carrying is prohibited, people would be confused and extend their carrying activities from the alleyway into the street. They therefore prohibited carrying in the alleyway if the opening on the fourth side was wider than ten amot.[2] A simple solution to allow carrying in the alleyway would be to construct a real doorway—a two-sided door frame and a lintel on the top—on the open fourth side. But the Sages permitted an easier solution, allowing one to construct a tzurat ha-petah (literally, a “form of a doorway”) on the open fourth side instead. 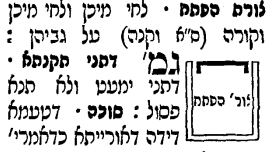 The diagram shows the entire alleyway enclosed on three sides with a new construction along the fourth side: a horizontal board attached to two perpendicular boards, one on each side.

Did Rashi draw this picture? Yes and no. It is likely that Rashi drew a picture, but not the one featured in the Vilna Shas. Although we do not have an autograph ketav yad (meaning a manuscript written by Rashi himself) of his commentary to Talmud Bavli, we have many manuscripts of his commentary which were created not too long after Rashi lived. It is from manuscripts such as these that we derive the proper wording of Rashi, and we can also use them to get an idea of the pictures that Rashi drew. The diagrams are not always exactly the same as in the Vilna Shas, but they are oftentimes close.

In this case, five manuscripts written from the 1200’s to the 1400’s contain the same hand-drawn picture. I will share three of these manuscripts, as they illuminate not only what Rashi might have actually drawn but also contain an additional word that provides further evidence that the drawing was part of Rashi’s comments on the daf.

The first is a manuscript known as Munich 216, which was copied within approximately 150 years of the time of Rashi:[4]

Significantly, this manuscript of Rashi contains an additional word at the end not found in the Vilna Shas. Here Rashi writes “a post here, and a post there, and a board on top, like this (ka-zeh)” and the simple diagram of an opening created by two vertical posts and one horizontal beam follows. The word “ka-zeh” — “like this” suggests that the picture that follows is part of Rashi’s commentary itself.

Another manuscript of an unknown date known as Vatican 127 features the same diagram and ka-zeh, but this time the drawing is clearer:

The final manuscript, identified as National Library of Russia EVR II A 266/1, is also of an unknown date, but again the diagram is very clear:

Beyond manuscripts, the first printed Eruvin published by Gershom Soncino in Pesaro, Italy in 1516 also clearly shows the diagram: 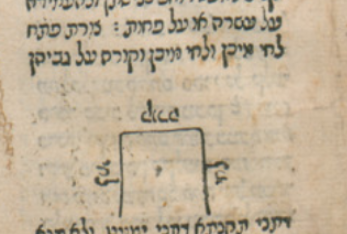 Yet here, in this first printed edition, the word “ka-zeh” has now been omitted, possibly due to space considerations. In other words, it could be that the manuscript Soncino used contained the word ka-zeh, but because Soncino included the picture from the manuscript, there was no reason to bother with the word ka-zeh anymore.[5] It is also possible that Soncino’s manuscript didn’t have ka-zeh. Still, the fact that other earlier manuscripts had the word is an indication that it was in the original Rashi.

The diagram was improved a bit more by the editors of the Talmud printed in Amsterdam in 1716:

In the Amsterdam edition, the tzurat ha-petah is placed in the alley itself, so the reader can see not only what it looks like but where it is situated. As a general matter, the 1716 Amsterdam edition took a lot of liberties with the diagrams in Rashi’s commentary.[6] This revised diagram is essentially the same as the one found in the standard editions of the Vilna Shas.

Yet that’s not quite the end of the story, as publishers of new editions of the Talmud—such as Oz ve-Hadar, Vilna ha-Hadash, and Vagshal—have modified the diagrams in the Vilna Shas to reflect even more accurately the situations being described. Below is the diagram included now in the Vagshal Mahadurat Nehardea edition of Eruvin printed in 2008: 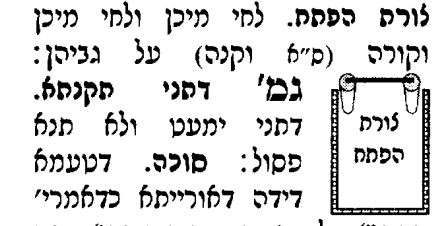 In this final diagram, the two posts for the tzurat ha-petah are clearly delineated.

Thus far we’ve examined the manuscript evidence for Rashi’s creation of the diagrams and surveyed how the pictures have changed over time. But why did Rashi draw what he did? It seems likely that the diagrams allowed Rashi to do more with fewer words. As Dr. Ezra Chwat, director of the department of manuscripts at The National Library of Israel writes, “[P]ictures are an organic part of the commentary, and it is possible that Rashi even allowed himself to limit his explanatory words when a picture was available to the reader. This is in the sense of ‘a picture is worth a thousand words.’ The picture is an integral part of the written book, no less important than the words.” While the diagram is not entirely necessary on Eruvin 2a, it does help nail down the positions of the two lehis and the koreh. There is an elegance and simplicity to the terse “a post here, and a post there, and a board on top, like this” that would be lost if Rashi wrote a longer comment explaining that to construct a tzurat ha-petah one needs to install a board on one side of the opening, another board on the opposite side of the opening, and then connect those two boards with a third board on top of them.[7]

In summary, we have seen that handwritten manuscripts containing Rashi’s commentary to the Talmud included not only the text that Rashi wrote, but also attempted to recreate the diagrams that Rashi drew to illustrate his words. These diagrams, perhaps sketched in their initial form by the great commentator himself, are a helpful addition as we try to form a mental picture of the cases about which the Talmud speaks.

[1] I would like to express my gratitude to Yosef Lindell for his assistance in formulating and editing this article.

[3] A tzurat ha-petah “is widely used nowadays to convert a karmelis [semi-public domain] to a reshus hayachid (and is colloquially known as an eruv).” ArtScroll Series, Eruvin: Volume I (Brooklyn, NY: Mesorah Publications, 1990, 2005), xliii.

[4] The National Library of Israel listing for this manuscript states that the copyist was Yehudah ben Binyamin of Lunel and estimates that it was written in the thirteenth century.

[5] It is worth noting that none of the early printed editions of the Talmud after Soncino Pesaro included this diagram until the Frankfurt an der Oder edition in 1697. So, from 1516 to 1697, all the editions (approximately 15) had blank spaces instead of a diagram.

[6] See Marvin J. Heller, Printing the Talmud: Complete Editions, Tractates, and Other Works and the Associated Presses from the Mid-17th Century through the 18th Century (Leiden: Brill, 2018), 118-19.

[7] In some instances, Rashi’s diagrams are far more integral to understanding the situation discussed in the Talmud. See my article, “A Vineyard That Has a Tail” which addresses Rashi’s comments and diagram concerning the configuration of a vineyard in Sotah 43a.