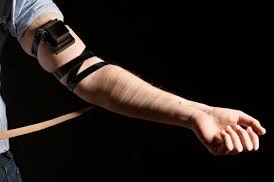 A fascinating, if obscure, custom is discussed by R. Jeffrey Saks in his Lehrhaus essay, “The Tefillin Strap Mark: In Search of an Obscure Minhag.” The custom, found in Shai Agnon’s short story entitled “Two Pairs,” tells of the author’s love of tefillin:

Mornings I would run to the synagogue. Sometimes I would arrive before the appointed hour for prayer and I would stare out the window at the sky to spot the sunlight when it would first appear so that I could then put on my tefillin. When prayer time arrived I would take out my tefillin, and a fragrance of prayer would emanate from them. As I lay the tefillah on my arm I could feel my heart pounding alongside them and I would then wind the straps around my warm arm until they pressed into my skin. And then I would circle my head with the other tefillah. … [When] I completed my praying, removed my tefillin, and saw pressed in my arm’s flesh the remaining evidence of the straps. I wouldn’t eat or drink until the indentations on my arm had completely disappeared. … How I loved them. Maimonides, of blessed memory, had surely done the right thing when he included the regulations pertaining to tefillin in his Book of Love.

What intrigued R. Saks was that he had never heard of such a custom, nor could he find a source for it in any book of Halakhah or minhag. After not a little bit of detective work, he found the custom mentioned in two other works, both written by people from the place and time of Shai Agnon’s youth: Galicia, late nineteenth century to the early twentieth century.

For R. Saks the mystery was solved, but for me it had only just begun. I was enchanted by the custom and thought – as Nahmanides famously wrote in his Letter to his son, “When you rise from reading a book, see if there is something you can implement from what you have learned” – that perhaps I too could perform this custom.

So the next morning, upon removing my tefillin, I started the stopwatch on my phone and waited. After thirty minutes there was no sign of fading, and I began to realize that this was no simple custom. After one hour I went to eat breakfast, but kept the stopwatch running. One hour turned into two and two into three, yet I could still see faint traces of the tefillin after three-and-a-half hours! Sadly, then, as much as I identified with this magical custom, fasting every day for half a day is not in my ambit.

Still, I still wondered about the motivation for the custom. What is the point of it? What is its message? After pondering the question for a long time, I came to the realization that love is the answer.

To begin, love is an essential element of one’s relationship with the divine. The Torah mentions the notion of loving God no less than ten times in the book of Deuteronomy.

One occurrence has Moses asking rhetorically,

While love is not the only thing God asks – fear, walk, serve, and keep are also on the list – nevertheless, love is central to the relationship. Indeed, on Moses’s appeal to love God, Midrash ha-Gadol (30:20), perhaps in accordance with Maimonides (see Hilkhot Yesodei ha-Torah 2:2) explains that love is of the essence to the relationship, for “love is the great virtue above which there is none higher.” So critical is love to our relationship with God that the Torah commands that we love God six times (Deut. 6:5, 11:1, 11:13, 11:22, 19:9, 30:16), two verses of which are written on the parchments of the tefillin. (See Sefer ha-Mitzot 3 and Sefer ha-Hinnukh 418).

This brings us back to Agnon’s love of tefillin. He concludes his description of the custom: “How I loved [my tefillin]. Maimonides, of blessed memory, had surely done the right thing when he included the regulations pertaining to tefillin in his Book of Love.”

Indeed, for when we put on our tefillin we manifest love by reciting the following verses:

If putting on our tefillin is like getting engaged to God, then perhaps we can say that taking off our tefillin is like taking leave from one’s betrothed. Accordingly, waiting for the imprint of the tefillin straps to fade is like longingly watching one’s betrothed leave on a trip. One wants not to take leave but to savor every moment, even to the last glimpse as she fades over the horizon. It is a love affair.

Religion declined not because it was refuted [which is to say, people did not decide to drop religion because there is proof that God does not exist or that the mitzvot make no sense], but because [religious observance] became irrelevant, dull, oppressive, insipid. When faith is completely replaced by creed, worship by discipline, love by habit … its message becomes meaningless.
-Abraham Joshua Heschel, God in Search of Man, 3 [brackets in original, emphasis added]

Heschel thus declaims the problem with religion in his day (1955), which sadly remains the problem with religion in ours. Importantly, he is not saying that there is no place for creed, no place for discipline, no place for habit. Rather, he is saying that when these things have become all there is to religion, then all is lost. If the great movement of faith has been reduced to avowals of principles, the awe-inspiring encounter in worship has become a mere act of discipline, and the passion of love has given way to the monotony of habit – then all is lost.