From twenty-sided dreidels to pet menorah hats, the American Hanukkah marketplace has reached new and at times satirical heights. As a designer of Hanukkah products, I have always wondered how this marketplace came to be. During a recent bout of designer’s block, I decided to head back to the early 1900s to draw inspiration from the Hanukkah gifts of yore. As I scrolled through digitized Yiddish newspaper ads, I was given insight into the origins of this Americanized market.

It turns out that Yiddish ads in newspapers such as the Forward (Foverts) or the Yidishe Tageblatt captured more than the growth of Hanukkah in America—they provided a window into immigrants’ first encounters with American culture. In her book Jewish Mad Men, Kerri P. Steinberg explains that “through its stories and advertisements, the Forward introduced first-generation immigrants to the American way” (p. 17). While these ads were intended for Hanukkah, they also provided explicit and implicit messages about how to keep up with their new American neighbors.

One of the earliest Hanukkah ads, a December 27, 1902, ad for tea and coffee on page six of the Forverts, was simply titled “Hanukkah Presents,” with the word “presents” spelled out phonetically in Yiddish. According to Steinberg, by spelling out English words in Yiddish, these ads “increased the vocabulary of the immigrant, assisting them in their acculturation exercises” (p. 87). In promoting tea and coffee, this ad taught immigrants how they could become classier and more American. This ad ironically used Yiddish to help Americanize immigrants’ food habits.

Advertisers also used Yiddish to teach immigrants how to smell and feel like real Americans. A December 9, 1920 ad on page four of the Forverts ad featured soap, perfume, aftershave, talcum powder, and dental cream (later known as toothpaste) as gifts for Hanukkah. Steinberg explains that “such ads helped make readers aware of the necessity of cleanliness and good hygiene as they evolved into acquiescent Americans” (p. 18–19). 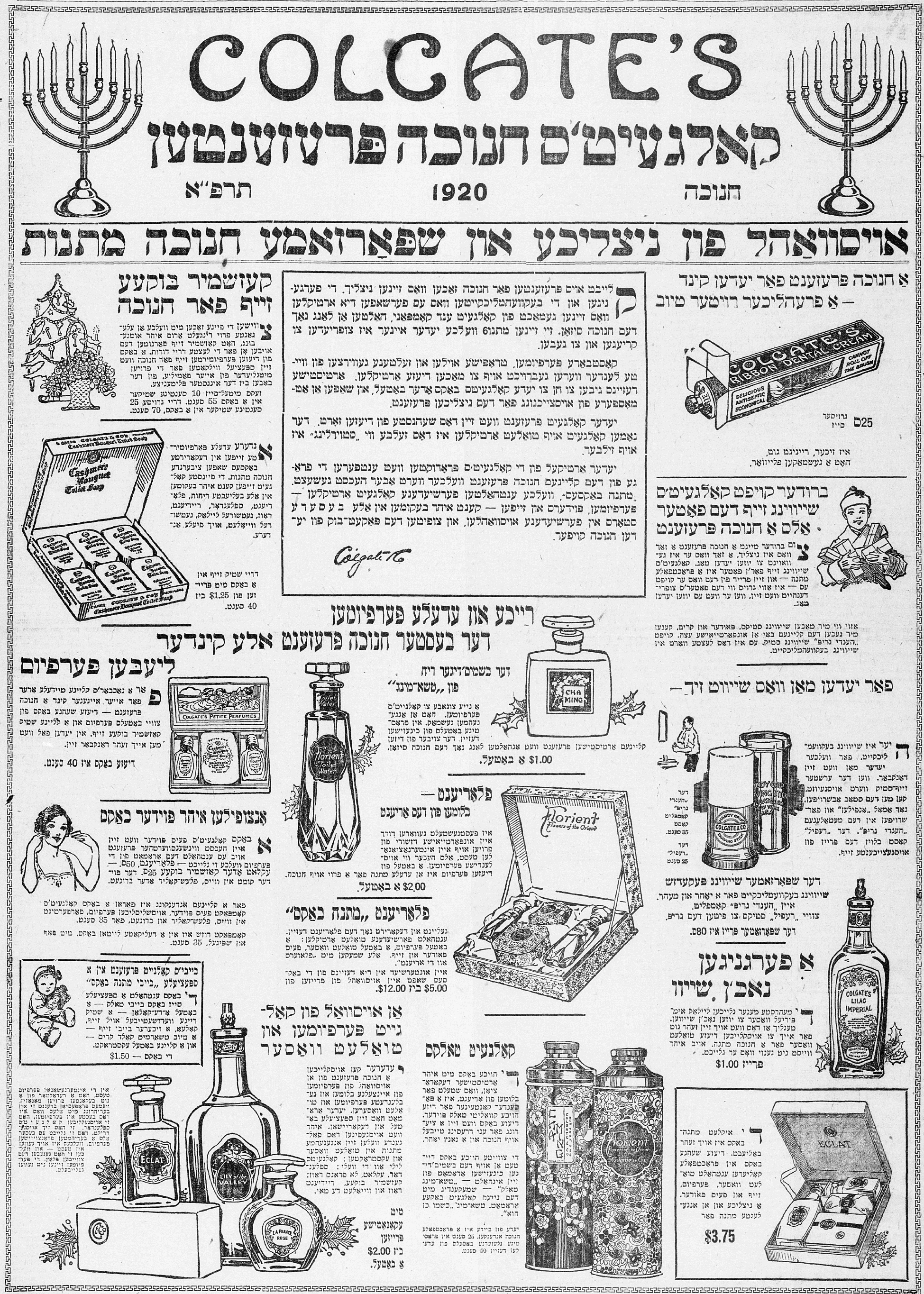 Food manufacturers also entered the Yiddish advertising fray. On December 12, 1917, The Hecker Cereal Company ran an ad on page three of the Yidishe Tageblatt for “pancake flour,” likely the predecessor of pancake mix, to make “Hanukkah latkes” (spelled out phonetically in Yiddish). Since latkes were typically cooked with schmaltz and potatoes, this ad tried to convince immigrants to switch over to a simpler American formula. When I asked her about this ad, the current Forverts editor Rukhl Schaechter explained its underlying message: “If the Jewish immigrants want to fit into America they might just make the switch to breakfast pancakes.” 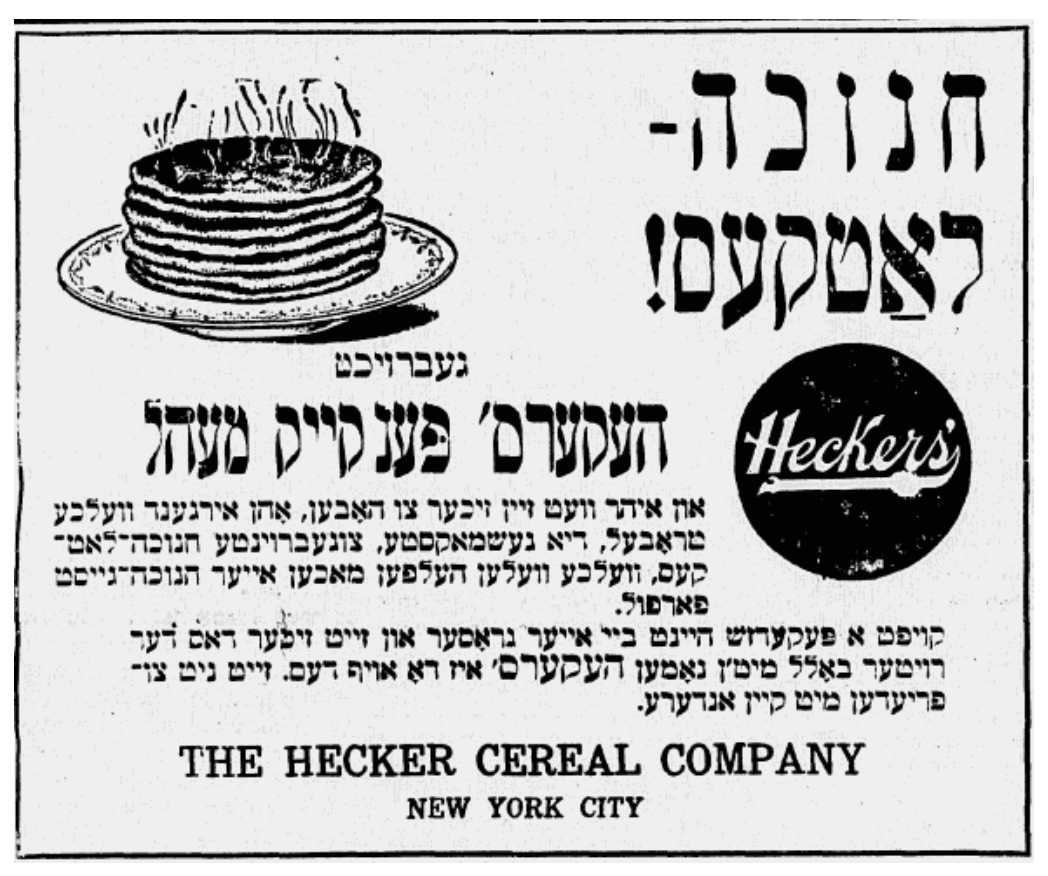 As an ad from December 21, 1932, on page six of the Forverts put it, “Let your guests choose which Hanukkah games to play, but if you want it to be a success, make your cakes with Royal Baking powder.” Forget about candles and dreidels—it was American taste, literally and figuratively, that would make immigrants’ meals a success. 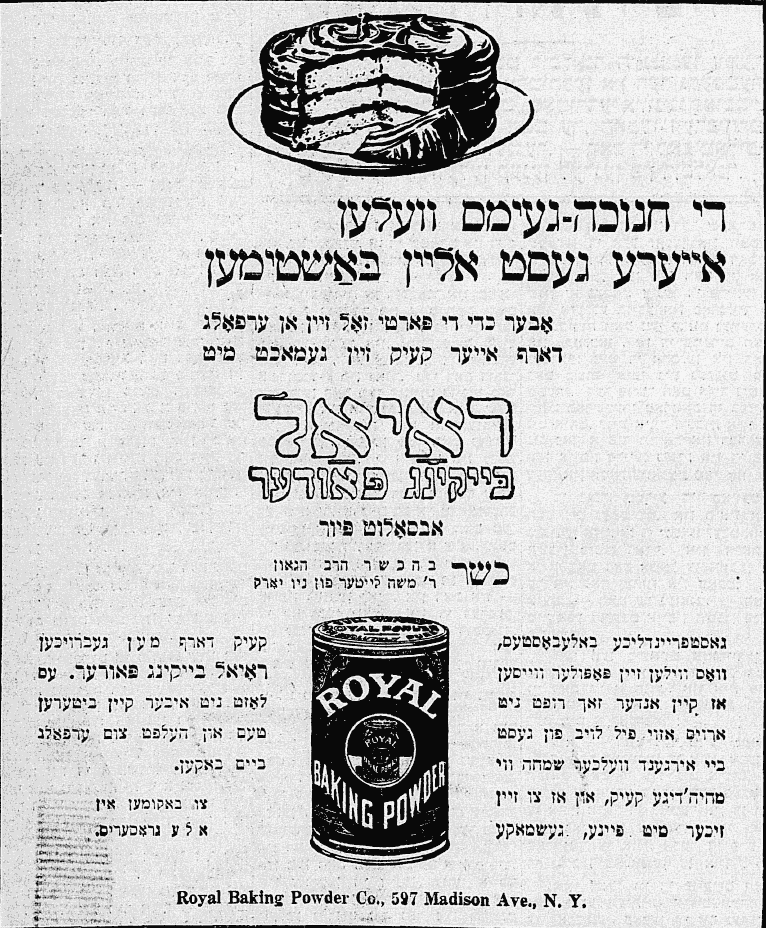 These Hanukkah ads presented immigrants not only with an opportunity but a choice: choose between your old-fashioned past and your new American identity. In her book Hanukkah in America: A History, Dianne Ashton explains that immigrants “could enact a range of identities either by selecting these new American products, by cooking with new American ingredients,” or by using recipes from the old country (p. 118). The irony of these Yiddish ads was that although they were written in the language of the Old Country, they viewed the ways of the Old Country as a regression; using American products was seen as laudatory.

Conveniently for advertisers, immigrants treated Yiddish ads as extensions of their already trusted Yiddish periodicals. The copy of Yiddish ads and the images that accompanied them paradoxically used immigrants’ native tongue to transmit tips for how to rid themselves of their Old Country ways. The subliminal Yiddish message was clear: shed your immigrant fashions to make room for your new American identity.

While immigrants might have not recognized the power of Yiddish advertising, newspaper editors certainly did. Ashton explains how some editors voiced concerns about the intensity, for example, of the growing Hanukkah marketplace. Ashton states how as early as 1907, “perhaps contradicting the paper’s own advertising,” the newspaper Yidishe Tageblatt “warned readers, ‘we do not want death from pleasure!’” (p. 113).

Yiddish Hanukkah ads did more than expand the Hanukkah marketplace; they used the mamaloshen to fastrack Jewish assimilation. These ads ironically contributed to a new miracle for Jewish immigrants in America—the ability to fully assimilate, with liberty and presents for all.