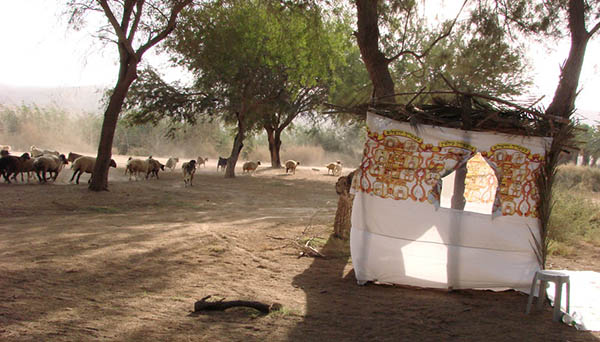 Eviatar Banai is an Israeli rock musician who comes from a well-known family of performers. He is also a ba’al-teshuva, a returnee to faith, and his songs reflect the various stages of his religious journey in the public eye. In his mesmerizing new song “Pergola” he reflects upon many of the changes in his life – musical fame, self-affiliation with the Haredi community, and the material accoutrements that accompany both developments. Many of the lyrics may be read as ironic, such as references to certain trappings of a bourgeois lifestyle (a “Hyundai Santa Fe,” his “crazy mortgage,” and eating “Kosher sushi” in the tony Jerusalem neighborhood of Shaarei Chesed). He describes his fame in equally wry terms – poking fun even at the way people praise his religiosity and his contributions to the Israeli cultural landscape. Indeed, the song’s repeated refrain, “יש לי מה להפסיד,” “I have something to lose,” points to the potential downside of success. One can become, as Banai sings, “a slave to the body, a slave to fear.” The more we have, the more we are vulnerable to our fears of losing it all.

Yet the music video which accompanies this song provides an intimate portrait of Banai’s own family, who share Banai’s bourgeois lifestyle with him, but also elevate it and turn it from a subject of irony into a source of visual beauty. A child with peyot racing down an alley on a bicycle, or strumming an electric guitar, a family in full Haredi regalia frolicking on the beach. This life is built on the same edifice of financial success and greater religiosity of which Banai is wary. It seems, then, that to separate external luxuries and internal spirituality is not simple. It is also not clear that Banai is aiming for such a clean separation.

The chorus of the song raises the possibility of “going outside,” of leaving complicated modern trappings to engage in a simpler, more elemental kind of existence. “I will bring wine, I will bring a ray of sunshine,” sings Banai,  “I will bring bread, I will bring wood and water” (אני אביא יין, אביא קרן שמש, אני אביא לחם,אביא עץ ומים). These lines, especially when heard in Hebrew, have a Biblical cadence to them. They recall someone who is making offerings to God, not necessarily in a formal Temple context, but perhaps in the more homegrown way we associate with the book of Genesis. Alternatively, these elements may also obliquely allude to the holiday of Sukkot, a time when we specifically “go outside,” drink wine, eat bread, and sit in structures made from trees that filter in sunshine. Water too is an important part of the ritual landscape of Sukkot, coinciding with the anxious beginning of the rainy season in Israel, which affects the coming year’s crops (as in m. Rosh Hashana 1.2). A pergola itself may also recall Sukkot, as it is a lattice roofed structure that can easily be converted to a sukkah with the addition of some natural greenery or bamboo.

Like the life that Banai describes in “Pergola,”  there are contradictory elements at the heart of the Sukkot holiday. On the one hand, the sukkot themselves are meant to recall the fragile temporary dwellings the Jews resided in when they were wandering in the desert (Lev. 23). Leaving our permanent homes to voluntarily enter this vulnerable setting, we are reminded of the fleeting nature of all our material accomplishments and of our ultimate dependence on God. This element of the holiday is reinforced by the book of Ecclesiastes, which is read every year on Sukkot. Ecclesiastes reminds us that “all is vanity,” it asks the question: מַה-יִּתְרוֹן, לָאָדָם:  בְּכָל-עֲמָלוֹ–שֶׁיַּעֲמֹל, תַּחַת הַשָּׁמֶשׁ, “What value is there for a man in all of his toil beneath the sun?” (Eccl. 1:3).  The book, like the sukkah itself, reiterates the idea that much of what we believe to be permanent, our homes, our possessions and so forth, are in fact as ephemeral as breath itself (hevel).

At the same time, Sukkot is a harvest festival, like Thanksgiving or Oktoberfest, or specifically, a time when the summer harvests were processed in advance of the rainy season. While Ecclesiastes reminds us that everything we toil for is in vain, Sukkot is also a celebration of the fruits of our labor. In Rabbinic literature, Sukkot is “Zeman Simhateinu,” “the Time of our Rejoicing,” and many aspects of the holiday, both Biblically and Rabbinically, have an explicitly joyous dimension. While the sukkah is meant to recall a fragile desert dwelling, sukkot are traditionally decorated in a beautiful manner, with furnishings and paraphernalia that are meant to recall one’s actual home.

Similar, in a way, to “Pergola,” the themes of Sukkot emphasize the ultimate meaninglessness of material possessions while simultaneously celebrating physical bounty with great joy. At the center of this paradox lies the “feast,” which appears prominently in the song and of course characterizes the holiday itself. At the climax of his song, Banai imagines a kind of feast, “I will bring wine… I will bring bread.” The sukkah by definition is a site of feasting, as one is traditionally obligated to eat all of one’s holiday meals in the sukkah. A feast, where a meal is both shared and consumed, is a physical experience fundamentally focused on food and aesthetics. Yet, the communal-social element of the feast, and the sanctification of the meal through blessings and other means, suggests that it is ultimately impossible to horde one’s bounty and keep it to oneself forever. While Ecclesiastes advocates for a kind of abnegation of the physical, the Sukkot holiday elevates these physical elements and transforms them into instruments of communal cohesion and spiritual growth. It is possible that Eviatar Banai did not intend to touch on all of the complex ritual and theological elements of Sukkot in his catchy song. Nevertheless, “Pergola” may help unpack some of the deeper messages of our most joyous Jewish holiday.

The lyrics along with a rough translation may be found below. Please be warned that some of the contemporary Hebrew idioms don’t translate easily into English:

I have something to lose, a Hyundai SUV, candy on my tongue, nice clothes.
One big, fancy house, a huge mortgage, a two-storey villa in Ramot.
Kosher Sushi in Shaarei Chesed, a permanent seat in the synagogue.
A pergola above and a pergola below.

I have something to lose, stopping in the street for pictures, they are full of compliments, packed Zappas.
I also sanctify God’s name, play a role in Israeli culture, the gold albums.
I’m on every playlist.
I’ve got a halo ’round my head; I’m on billboards, in headphones; with a potbelly.
A pergola above and a pergola below.

I have something to lose, shiny black shoes, on the blue carpet, with manicured trees circling around.
And there’s a competition, I can’t lose, just let them pass me by, play the drums harder.
A slave to the body, a slave to fear, the fruit of deception, an unexplored abyss.
A pergola above and a pergola below.