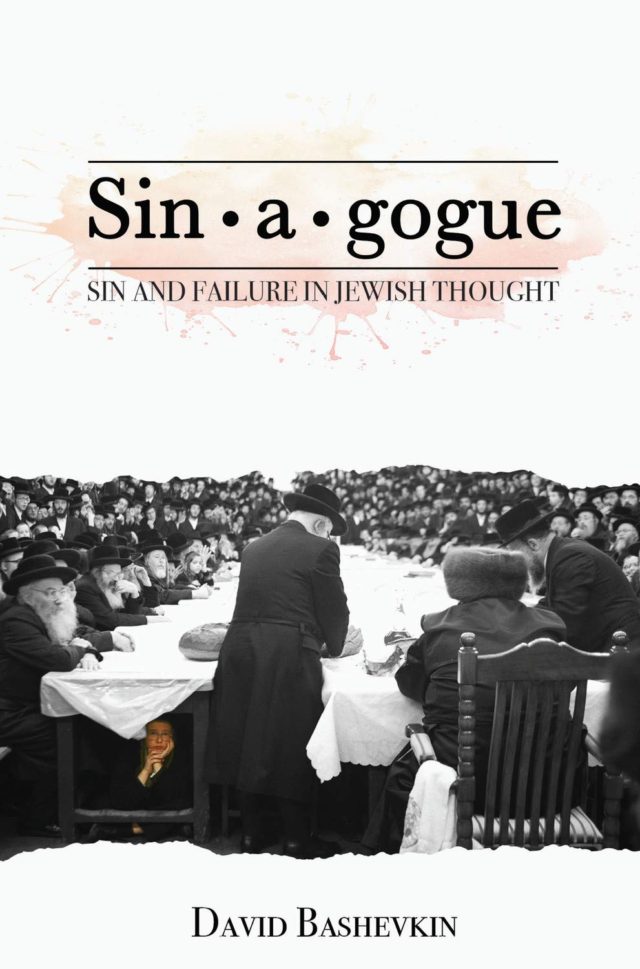 Thus begins Shaul Magid’s foreword to David Bashevkin’s new book, Sin-a-gogue: Sin and Failure in Jewish Thought (Academic Studies Press, 2019). And it’s true – sin may be something that happens for many (if not most) on a daily basis, but it’s also something which is rarely discussed in public. When I was growing up in the New York Modern Orthodox community, after the first-grade explanations of sin and repentance, sin didn’t receive all that much attention. The only sin that could legitimately be decried from the pulpit and talked about at Shabbat meals was lashon ha-ra. But what about some of the less savory sins that many otherwise committed Orthodox Jews commit? Violations of tax fraud, internet pornography, as well as a myriad of other common financial and sexual infractions within the Orthodox community – I certainly never heard those decried or even discussed from the pulpit.

Bashevkin should be commended for his courage and independent thought in tackling a subject, at once so important and so taboo. In the midst of the month of Elul, we are not far from Yom Kippur. We begin the Kol Nidrei service on Yom Kippur with the unambiguous line which welcomes the sinners in our midst to join in the prayer: “anu matirin le-hitpalel im ha-avaryanim,” “we ask permission to pray with the sinners.” And even before Kol Nidrei starts, many have the custom of arriving early to synagogue to recite Tefillah Zakah, with its explicit descriptions of sin and temptation   as they impact every bodily organ. It isn’t our tradition which has hang-ups over sin – from the Bible to the Talmud to medieval pietists to later responsa literature – there are Jewish texts replete with an awareness of sin (many of them discussed by Bashevkin in his book). It is we who have the hang-ups.

Bashevkin’s writing is infused with both a depth and breadth of Jewish knowledge as well as wide-ranging general knowledge. The subsections are short and written in an engaging and easily readable style. Each chapter opens with a story or case from the world at large and then moves into a Jewish source-based angle to the question, ultimately looping back to the story or case with which the chapter began, thereby providing a sense of closure. Creating conversations across religions, cultures, and time periods – such as between Brother Daniel, a Jewish convert to Catholicism who petitioned the Israeli Supreme Court to be included in Israel’s “Right of Return,” and Talmudic and medieval discussions of apostasy (chapter 7) – is enriching and also serves to broaden the discourse beyond the uniquely Jewish context.

The book’s introduction, entitled “The Stories We Tell,” offers an engaging discussion of how we choose to tell stories, both in the wider stories we tell about rabbis of previous generations (what Bashevkin refers to with approbation as “sanitized storytelling”), to the more narrow family stories we tell, to the very personal story we tell when we write our own bio for a lecture or on a book jacket. Based on a research-based survey which found that “the oscillating family narrative” (a story of family history which recounts both successes as well as failures) cultivates the most resilience in children, Bashevkin extends this argument to Judaism, claiming that the way to cultivate religious resilience is likewise to focus on both success and failure, sin and repentance, as part of the religious narrative we model. He offers Rabbi Yitzhak Hutner as a model of this praxis, and quotes from one of his most famous letters, in which he discusses the importance of sin in religious life, for it is only through sinning that the righteous are able to reach the heights which they reach. In Rav Hutner’s words, “Greatness does not emerge despite failure; it is a product of failure” (p. xv, and again on p. 144). The fact that the book ends by returning to Rabbi Hutner’s letters and his integration of spiritual failure into religious life, underscores the deep impact that Rabbi Hutner has had on Bashevkin’s thought. One way of reading Sin-a-gogue is as an attempt to translate Rav Hutner’s thought and make it accessible and relevant to the 21st century reader.

As he writes in his bio on the book jacket, Bashevkin is the director of Education for NCSY, the youth movement of the Orthodox Union. NCSY is a major site of kiruv, often catering to Jews who attend public schools and who know little about Judaism from home, trying to bring these teenagers closer to Judaism and halakhic observance. I would venture to say that in his professional capacity, Bashevkin has certainly encountered another angle on the issues about which he is writing. Indeed,    in the beginning of chapter eleven (originally published at Lehrhaus), he begins with a brief discussion of his frustrations as an educator who sees people coming to religion from the wrong motivations (i.e., out of loneliness, illness, or a broken family life), though he cuts this discussion short. Overall, Bashevkin makes a conscious choice to keep the focus of the book on the intellectual and to maintain a critical distance. While the less personal voice definitely serves to widen the readership beyond Orthodox Jews, it also carries the possibility that the book can be read exclusively on the intellectual level, such that   the reader can choose not to take a practical message from it. As a fellow Orthodox Jew who doesn’t see the issue as solely intellectual, I would have appreciated a stronger place for Bashevkin’s   personal voice.

This book follows on Bashevkin’s earlier Hebrew book, Be-Rogez Rahem Tizkor (2015), which, though it also deals with sin and repentance, is substantially different. The Hebrew book is a “sefer,” exclusively a work of Jewish thought, of lomdus, without reference to materials outside the Jewish tradition. It also contains more of an inspirational tone, speaking to the reader as a fellow traveler in the religious experiences of failing and recouping. In contrast, the current work, while firmly grounded in traditional Jewish sources, includes a wealth of material from outside the Jewish tradition, giving the book a wider reach and potential to speak to an audience which is not exclusively Jewish and steeped in Jewish knowledge. It also has more of a detached tone, so that it doesn’t sound at all “preachy.”

Sin-a-gogue contains three sections, each with several chapters surrounding a theme related to sin. The first section, “The Nature of Sin,” begins with a discussion of the many words the Bible and later rabbinic literature use for “sin.” In addition to the multiplicity of terms, each with subtle differences from the others, there are also multiple images for how sin is constructed – as a burden, or as a debt – each of which leads to a different conceptualization. The impact of language cannot be overstated. When I was writing my doctoral dissertation[1] and asking friends for advice, several told me to take out the word “sin” from the doctorate – it was too strong, too alienating. They suggested I replace it with the more neutral “violate the Halakhah.” While the words may mean the same thing, the sanitized version doesn’t emotionally capture the fullness of the experience of sin and its impact on the individual: the range of shame, guilt, conflicted pleasure, and self-loathing which can often result from sin, and which are discussed by Bashevkin in light of the differing terminologies.

In the next chapter, Bashevkin moves to a discussion of the first case of sin, or “Original Sin” concluding that “lateness, sin, failure, and shame are the crucial components that make humans human” (p. 21). From here he moves to a discussion of action versus intention and which is needed in order to categorize something as sin, as well as a discussion of the various levels of intention that one can have behind an action (shogeg, meizid, mitasek, and oness). Bashevkin also goes on to discuss issues such as determinism and the unique view of sin taken by the Hasidic school of Izbica, including the radical notions “sinning for the sake of Heaven” (aveirah lishmah) and the concept of God’s repentance. Each of these discussions opens another angle to sin, introducing rich source material.

The second section, “Case Studies in Sin and Failure,” deals with several instances in which an examination of the specific case can also teach us about the broader issues. From a chapter on the concept of apostasy in Judaism and whether it is possible to ever leave Judaism, to a character analysis of Jonah, whose quest for truth leads him to scorn those who would repent out of practical considerations, to an analysis of the “Rabbi’s Son Syndrome” in which specifically children of clergy often end up leaving religion – this section adds depth to the topic through the layering of each specific example.

The final section, “Responses to Sin and Failure,” contains fascinating material found in rabbinic correspondence on sin and failure. The material contained in the rabbinic correspondence is a treasure-trove for both parents and Jewish educators, who are looking for concrete ways in which to respond to their children or their students in situations of sin and religious failing and their aftermath.

Sin-a-gogue should have a place on the shelf of parents and Jewish educators alike. Beyond the main text, the footnotes should be read and primary sources opened, for they will help us all to educate the next generation with a healthier understanding of sin than we were raised with. The book of Kohelet teaches us that no human being is completely righteous without failing (7:20); failing is intrinsic to human nature, and also intrinsic to growth. If we were able to better understand the place of religious struggle, we would be better equipped to educate the next generation into a full life of avodat Hashem – both the victories and the failings which propel us forward. For those looking for a new book to buy this Elul, which will help move them into the mindset of the Yamim Noraim, as well as push them to think in new directions about very traditional categories – Bashevkin’s Sin-a-gogue is it.

[1] My dissertation “Talmudic Re-readings: Toward a Modern Orthodox Sexual Ethic” (City University of New York, 2008), dealt with the conflicts faced by Orthodox singles in navigating between their commitment to halakhic observance with the challenges of observing the halakhic sexual restrictions.