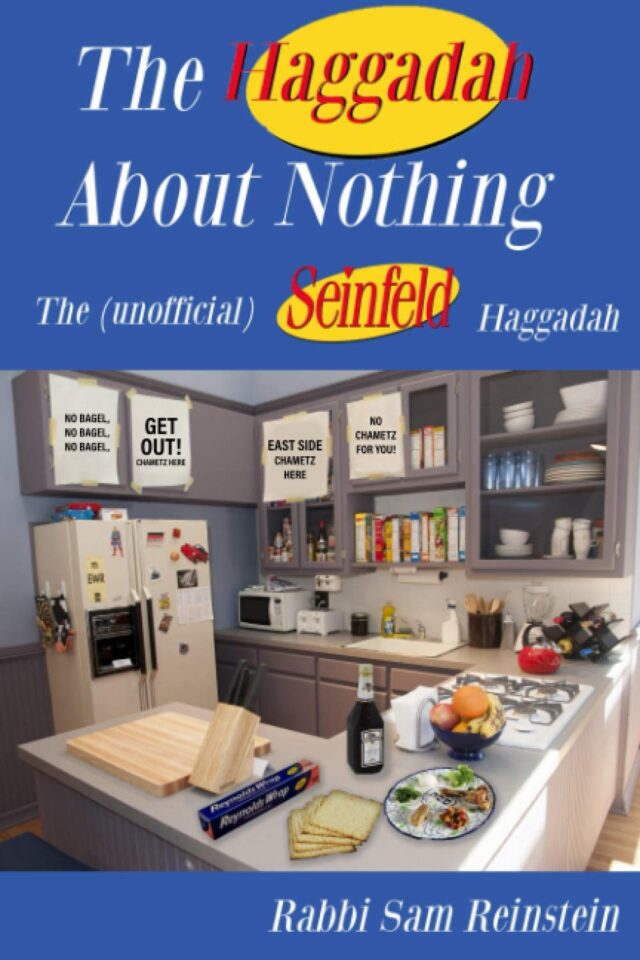 Review of Sam Reinstein, The Haggadah About Nothing: The (Unofficial) Seinfeld Haggadah (2021).

At first glance, Seinfeld doesn’t seem like a natural choice of a pop culture fandom upon which to base a Haggadah. Although fans of the acclaimed 1990s sitcom will tell you that there’s a Seinfeld reference for every situation, the show is different from other fandoms that have recently had Haggadot devoted to them. Unlike superheroes or Harry Potter (both of which are topics of themed Haggadot by Rabbi Moshe Rosenberg), Seinfeld is not a sweeping epic exploring themes of good versus evil or the downtrodden against their oppressors. On the contrary, this show about the daily lives and misadventures of four thirty-something New Yorkers—Jerry (Seinfeld), George, Elaine, and Kramer—is famously known as “a show about nothing.” Despite this, author Rabbi Sam Reinstein writes in his acknowledgements that watching Seinfeld was “a learning experience for me,” and that the show “provides insight into the nature of being human.” So too, this Haggadah, despite being titled The Haggadah About Nothing, aims to use Seinfeld to shed light on the Seder experience and help readers look at the Haggadah’s ideas through a new, humorous lens.

So how, exactly, does Seinfeld connect to Pesah? Or, to use Reinstein’s words (and the type of question most associated with Seinfeld[1]), “What’s the deal with a Seinfeld themed Haggadah?” Reinstein offers two answers in his introduction. First, Seinfeld was hugely popular and transformative for sitcoms as a genre, and the Pesah story is similarly iconic and culture-defining. Second, both the Seder and Seinfeld are about change, although they draw opposite conclusions: while the point of the Seder is to transform us—to make us feel like we’ve experienced the Exodus and come out as different people—the Seinfeld characters never change. As pointed out by Reinstein, co-creator Larry David’s mantra for the show was “no hugging, no learning”—in other words, the characters should never get emotional or learn any lessons. After nine seasons of fulfilling this mantra, the main characters (spoiler alert!) end up in prison. The point of the Seder then, according to Reinstein, is “to learn the lesson of Seinfeld. If we don’t stop and examine the shackles we place on ourselves, we will never be free.”

Indeed, one focus of Reinstein’s commentary is contrasting the shallow, superficial Seinfeld characters with the more meaningful lessons that we’re supposed to be getting out of the Seder experience. For example, Reinstein contrasts George’s view of reclining with the perspective we are meant to take when reclining at the Seder. George views reclining as a “way of abrogating responsibility and being free to waste his time as he wishes,” as seen when he buys “a recliner with a fridge built right into it” in which he plans to spend his “summer of George.” But according to Reinstein, when we recline at the Seder, instead of being passive, we are actively creating an environment in which we are physically unburdened and therefore able to think freely and open our minds to new ideas. Similarly, Reinstein contrasts the well-known idea that we are not meant to fully rejoice in the downfall of the Egyptians (exhibited by the wine we remove from our glasses while reciting the Ten Plagues) with the many examples of the Seinfeld characters’ tendency to take pleasure in the misfortunes of others, whether because it benefits them personally or just because they find it funny.

While some parts of Reinstein’s commentary focus on contrasting Seinfeld with the lessons of the Seder, the bulk of it consists of connecting ideas about the Seder to famous incidents from Seinfeld in creative and interesting ways. For example, in a section on Pesah preparations at the beginning of the Haggadah, Reinstein explains that Pesah commemorates the start of the Jewish people’s relationship with God, and compares the state of this relationship to that of Seinfeld’s Bubble Boy. Just like the Bubble Boy’s illness requires him to live inside a protective “bubble” free from foreign objects, our fragile new relationship with God has no room for imperfections and requires us to be very strict about ridding ourselves of the “foreign” hametz. In explaining that we must come to the Seder hungry, Reinstein writes that our dinner on Erev Pesah must start before 4:30 PM, as was the custom in Del Boca Vista, Jerry’s parents’ retirement community. When describing the meaningless work that the Egyptians required of the Jews, he compares it to the tasks Elaine’s boss, Mr. Pitt, requires her to do, like removing the salt from his pretzels or finding him the perfect pair of socks. While on occasion these connections are a stretch or don’t quite work, most of them serve to make the Haggadah insight funnier or more memorable.

The commentary is at its best, though, when it goes beyond humorous connections and actually uses its Seinfeld references to enhance our understanding of a Seder concept or to make it more relatable. For example, Reinstein helps us relate to the excitement we are meant to feel when we recite the sheheheyanu blessing for new or special occasions by comparing it to Kramer’s excitement about Mackinaw peaches, which, as Jerry explains, are only ripe for two weeks each year. Kramer raves to Jerry about this “miracle of nature that exists for a brief period,” which he’s “waited all year for.” While Pesah may not always seem so exciting, imagining Kramer’s enthusiasm for the delectable peaches gives us an attitude to which we can aspire. Similarly, Reinstein uses a Seinfeld reference to help illustrate and strengthen a question when he wonders why the Jews stopped to collect riches from the Egyptians when leaving Egypt, instead of rushing out immediately. He compares this to the time when Elaine finds out that her boyfriend has been in a car accident, but instead of rushing straight to the hospital, stops first to buy some Jujyfruit candy. Elaine is criticized for this, both by her boyfriend and, later, by Jerry. By connecting the Jews’ behavior to the Jujyfruit, Reinstein helps us understand why their actions when leaving Egypt were so odd, which then leads to a better appreciation of his answer to this question—that the Jews were ready to rush out, but God wanted them to leave with great wealth in order to fulfill His promise to Abraham and show His strength over Egypt.

In addition to the Seinfeld connections that make up the commentary, pretty much every other aspect of The Haggadah About Nothing is brimming with Seinfeld references, starting from the very first page, a dedication to George’s deceased fiancee, Susan Ross. The wording of the acknowledgements parodies the Airing of Grievances tradition from George’s family’s alternative Christmas-season holiday, Festivus; this “Airing of Acknowledgements” begins, “I got a lot of blessings from you people. Now, you’re gonna hear about it.” The lines that divide the Haggadah text from the commentary below it are written out as the familiar “Bee ba doo dum dum…” of the Seinfeld theme. The sections of commentary are titled in the same way as the Seinfeld episodes, all beginning with the word “The.” Even the English translation of the Haggadah text, adapted from Sefaria.org, has Seinfeld references in it! (This is amusing for Seinfeld fans, but would probably lead to confusion if you try to use it when it’s your turn to read aloud at the Seder table.)

The illustrations, by Shira Greenspan, are also mostly Seinfeld references. Usually, they refer to something specifically mentioned in the commentary, but occasionally, they are delightful surprises for the reader to recognize on their own. (The eclair in the trash can! The marble rye on the fishing pole! The muffin tops!)

Seinfeld enthusiasts will appreciate the astounding number of references that Reinstein has included in his Haggadah. Impressively, he even manages to mention “The Contest,” considered to be one of the best episodes of Seinfeld, without needing to explain the not-exactly-Seder-appropriate meaning of the episode’s most famous term, “master of my domain.” Those not familiar with Seinfeld, however, would have a hard time understanding a lot of the Haggadah (as the previous example demonstrates). While many of the references do include enough explanation for the uninitiated to understand their point, some of the funniest jokes, like the Seinfeld version of the Ten Plagues, would be completely incomprehensible to someone who hasn’t watched Seinfeld.

That being said, for Seinfeld fans, this Haggadah is a lot of fun and therefore a welcome addition to the Seder experience. I can’t say that it greatly inspired me or helped me see Pesah in a new light, but I suppose that can’t really be expected of a Haggadah based on a show that promises no hugging and no learning. By using the Seinfeld characters’ foibles and misadventures to illustrate some of the points and lessons of the Pesah story, Reinstein has created a fun, funny Haggadah that will bring an added humorous dimension to the Seder table.

[1] A fun fact—and something this Haggadah gets wrong—is that Jerry Seinfeld does not actually use the phrase “What’s the deal with…” in his standup comedy or dialogue on the show, except when making fun of the phrase itself. The phrase originated in a Saturday Night Live sketch called “Stand-Up and Win” from when Seinfeld hosted the show in 1992.

Can We Cancel Tishah Be-Av? The “Four Fasts” in Light of the Miracle of the Modern State of Israel

The Difference Between Lo Tahmod and Lo Tit’avveh: An Insight Based...

Can We Cancel Tishah Be-Av? The “Four Fasts” in Light of the...