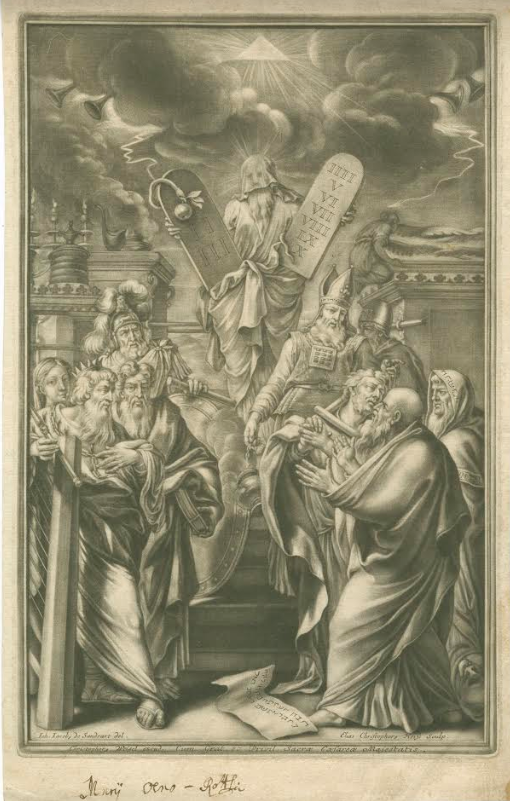 When Moshe reached the top of Mount Sinai, he found God sitting at the peak, holding a deck of cards. The cards were normal size, but they looked tiny in His mighty hands.

“Pick a card,” said God, fanning them out, faces to Moshe. “Any card.”

Moshe picked a card. The king of hearts.

“Now,” said God, “put it back in the deck.” And God held the deck out to Moshe, who stuck it in the middle while God turned His face away.

“Would you like to shuffle them?” asked God, and Moshe took the cards in his two hands. He shuffled them, but clumsily, for he was not one for games.

“Now hand them back to Me,” said God, and Moshe did.

God held the cards and began shifting them from hand to hand, spinning the deck this way and that, shuffling and reshuffling. “I am the Lord your God,” said God, and the cards flew over His head, from one hand to the other. “The One who brought you out of Egypt.” The cards exploded outwards in every direction, fluttered in the air like birds, surrounding Moshe in a cloud of white and red and black. God turned up his palm and the cards flew back towards it.

“No other gods than Me,” said God, and with His pinky He jabbed at the deck, cutting it in half. The cards began to bleed where they had been cut. “And do not use My name in vain.” He clapped His hands and the deck reformed, like it had never been broken. “Remember the Sabbath. Honor your parents.”

“Is this all part of the trick?” asked Moshe, and God nodded and said, “Yes, but don’t interrupt. Thou shalt not kill.” With a flick of His wrist, God threw a card at a neighboring mountaintop, the tip of which was sheared clean off. “Thou shalt not commit adultery,” and He brought the king of diamonds and the queen of spades together; they immediately burst into flames. “Thou shalt not steal,” He said, and God leaned over to Moshe and reached His hand behind his ear, brushing his hair. Moshe shivered. In God’s hand was another card, but no sooner had Moshe seen it than it also burst into flames. “Tsk tsk,” said God, mockingly, and gave a wide smile. “Remember: thou shalt not bear false witness. And thou shalt not be jealous.”

God’s hands were balled into fists; He opened one and laid something on the ground. The deck of cards, face down. With thumb and index finder, God peeled off the top card and placed it in Moshe’s hands.

“Is this your card?” God whispered.

It was a heart—a human heart, still beating, its rhythms matching the ones in Moshe’s chest. “I—sort of?” stammered Moshe, embarrassed on God’s behalf, holding the heart away from his body awkwardly in stiff hands. “My card was—”

“Oh! How silly of me, I forgot the final step,” grinned God, and the heart split open. There, in the inner chamber, was a card: the king of hearts.

Moshe exhaled. “Lord,” he said quietly, “is this in the Torah that you have given me?”

“No, dear Moshe,” said God, taking back the card and the heart. “but it is called Talmud, and it is my true passion. Would you like to learn it?”

“With every fiber of my being,” said Moshe, and his own heart leapt a little.

“Good, good,” said God. “Let me show you again.” And God ran through the whole trick, with all the audience banter, but this time more slowly—and then, upon Moshe’s request, slower still. When Moshe could perform the trick flawlessly, God moved onto the next trick, and then the next one. Moshe stayed on Sinai for forty days, neither eating nor drinking, moving objects from one hand to another, revealing and concealing, manipulating, faster and faster, until the hand movements had become as natural as breathing and the scripts were seared into his mind.

At the end of the forty days, Moshe began to descend the mountain. Far below, he saw the people worshipping a golden calf. Something had gone wrong.

The people glanced up; impossibly, Moshe was approaching, two heavy tablets in his hands. “So this is what you choose to do?” shouted Moshe. He glanced backwards and winked. “Well then, watch carefully!” And Moshe rolled up his sleeves and threw down the tablets, which shattered into millions of pieces on the rocks below. There was a collective gasp.

“Now that I have your attention,” said Moshe. He raised his right hand and snapped his fingers—and then held up his left hand, which again held two tablets. The people clapped; Moshe bowed. The letters on the tablets glowed. They were written in Moshe’s own hand.

“It is a tradition from Sinai,” said Moshe. “Would you like to learn it?”

“With every fiber of our being,” said the people.

Is Remix Judaism for Everyone?