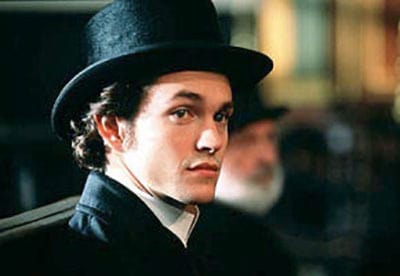 My experience reading Daniel Deronda was a little like turning on the radio to Paul Harvey, who, in his deep and dignifying voice, begins to tell “the rest of the story.” At first, you listen with mild interest. But then, a detail here, a name there. Sketches of scenes you could fill in from your own memory. Sentences which you can finish before he does. It strikes you as impossible—and yet!

I knew I had to read it. I had that very thought when I first learned about Daniel Deronda, George Eliot’s philosemitic, proto-Zionist novel. I confess sheer astonishment. Published in 1876, the novel took its British audience to a terra incognita: to the Judengasse, to the synagogue, to the Sabbath table, and to the inner sanctuaries of Jewish thought. For Jewish audiences, then and now, the novel takes its reader home. It’s not just that characters in the novel speak in familiar talmudic aphorisms or bestow Sabbath night blessings on their children. It’s that Eliot evokes all this with such authenticity and contagious enthusiasm; that she (Eliot’s real name was Mary Anne Evans) prescribes Judaism’s vibrant ethical legacy as an antidote to an England that was, according to one critic, “dead to history and hopelessly enmeshed in the pursuit of material goals.” The Jewish characters are the most decent ones in the novel not despite, but rather because of, their Jewishness. Daniel Deronda is a book that makes you proud to be a Jew.

My appreciation for the novel only grew after I began tracing Eliot’s initiation into the world of Jewish texts, specifically the Talmud. It was for my undergraduate thesis at Stern College. I spent many hours poring over Eliot’s notebooks, and scouring the novel itself for resonances of her exhaustive talmudic research. I recall how my roommates began to insist I was dating a British boy named Daniel. In truth, Daniel Deronda is not a difficult man to fall in love with. When a reader first meets the titular character standing near a roulette-table, his distinguished appearance and refined manners mark him apart from the gilded, gambling masses. No wonder, then, that he catches the attention of the young British gentlewoman, Gwendolen Harleth. She sees in his eyes an objection to her gambling. He sees in her defiant air a cry for help. Their chance encounter sets in motion a narrative which defies romantic tropes and which interlaces the ennui of a bloated British aristocracy with the nationalistic, messianic fervor of a dying Jewish Kabbalist.

Daniel Deronda is not an easy or quick read. Fortunately, for the Eliot enthusiast, or even just the curious, there has emerged a new online series on the novel taught by Harvard professor Dr. Ruth Wisse. Each installment of the series illuminates a different facet of the novel, including its Jewish nationalism, political vision, and themes of evil and beauty. Wisse is delightful reading company. She contextualizes the story both historically and literarily, intersperses her analysis with colorful anecdotes, and reads aloud key passages to ensure that you don’t miss the nuances. The self-revelatory offerings of this noted scholar and writer are endearing.

What I found perhaps most striking about Wisse’s course was her treatment of Leonora Halm-Eberstein, the novel’s most problematic character: a proto-feminist Jewish mother who abandons not just her religion but her baby son as well. Halm-Eberstein’s rationale for rejecting her Jewish faith amounts to a diatribe against the stringencies of Jewish law:

I was to feel awe for the bit of parchment in the Mezuza over the door, to dread lest a bit of butter should touch a bit of meat … to adore the wisdom of such laws, however silly they might seem to me. I was to love the long prayers in the ugly synagogue, and the howling, and the gabbling, and the dreadful fasts, and the tiresome feasts.

Wisse points out that Halm-Eberstein, resentful of the demands of Jewish law, conceives of freedom as “freedom from.” Freedom from family, community, and religion. She bucks the yoke of her past and forges her own lonely future. While this would likely make her the heroine of any modern-day novel or film, in Eliot’s rendering, she is every bit the villain.

The Jewish heroes of the novel, by contrast, view their freedom as “freedom to.” This means the freedom to help those in need and to build a new home in the Land of Israel. They use the freedoms that their financial resources, intellectual faculties, and even romantic love afford them to effect positive change on a national scale. In a stunning inversion of the “Jewish conversion plot,” it has been noted, a British literary tradition in which the pat answer to the “Jewish Question” is the conversion of Jewish characters to Christianity, the only two negative Jewish characters in Daniel Deronda are both Jewish apostates. Conversely, the novel’s Jewish heroes forgo the unencumbered life of the British Christian mainstream, choosing instead to embrace the responsibilities of their religion.

In this way, Eliot’s novel is not just prescient in its pre-Holocaust call for a Jewish homeland in Israel but in its repudiation of a feminism that is premised not in the freedom to do and be more, but in the freedom from responsibility. The young Jewish woman in America today ought to find this message truly powerful.

I am an English teacher at an all-girls Modern Orthodox high school. Together, my students and I have traveled to terra incognita: to the Ibo huts of Chinua Achebe’s Things Fall Apart, to Hygelac’s mead hall in Beowulf, to King Arthur’s court in Sir Gawain and the Green Knight. My students were as intrigued and disoriented by these new places as was Eliot’s British audience by Daniel Deronda.

Hallah, Mikvah, candle-lighting, presiding over a Sabbath table, teaching a child to say Shema—these roles and rituals of the Jewish woman will never glisten for my girls with the allure of the exotic. They will never see them through the eyes of a tourist the way the British reader saw Eliot’s portrayal of the Judengasse.

Yet, it is my hope that as I chaperone my girls on these voyages to far-flung places, they never forget the golden warmth of their own homes, the beauty of their own tradition. That after admiring the architecture, visiting the national museums, and bartering with a tourist’s tongue in the markets, they return not just with an appreciation for the places they have left, but with a greater appreciation of home. I hope that as an English teacher in a Jewish school I can impart to my students what Eliot imparted to me through Daniel Deronda: respect cultures other than your own, but know how exquisitely lucky you are, and how exciting it truly is, to be a Jewish woman.

In several days, Jews around the world will celebrate Passover, the Festival of Freedom. Daniel Deronda is a reminder to carry our Jewish tradition as a badge, not as a burden, and to recognize in its many laws and restrictions the freedom to be our most ethical and dignified selves.

A Journey Across the Ages: Esther in America