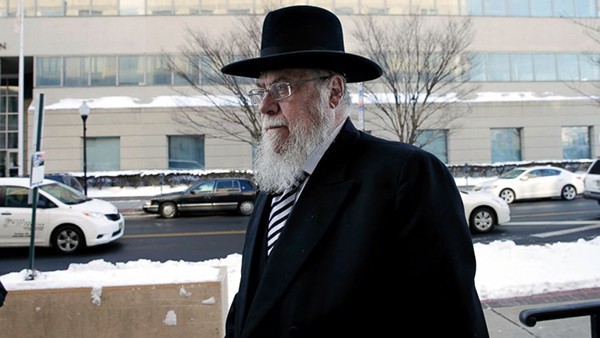 The torture-for-get (Jewish divorce document) plot is back in the news, this time because the criminal prosecution appears to have finally wound down. As a refresher, in 2013, the FBI arrested a group of Orthodox Jewish men, including a number of rabbis, accused of running a torture-for-hire service. What grabbed national headlines, and presented a wrinkle for the federal prosecutors, was that, for a total fee of around $60,000, the group targeted husbands who had refused to grant their wives a get.

Under Jewish law, a get is only effective if the husband grants it willingly. And therefore these husbands, in refusing to grant their wives Jewish divorces, have trapped them in hopeless marriages, often with the goal of extracting some sort of ransom or to simply harass their spouse by maintaining religious control over the all-but-dead marriage. Jewish law and the broader Jewish community have a very dim view of such husbands; they are considered the lowest form of human being, abusing Jewish law to inflict untold emotional harm on their spouse. And communities often expend significant effort to pressure husbands to grant Jewish divorces to their wives, publishing the names of those who refuse and sometimes protesting outside their business or home.

The “Get Torture Gang” took this all one step further. They kidnapped and physically tortured husbands until they agreed to “willingly” grant their wives Jewish divorces. When the federal authorities got wind of this torture-for-get scheme, they conducted a sting, collecting enough information to prosecute and convict some of the defendants.

But the story didn’t end with the conviction. Armed with an affidavit from Rabbi Irving Breitowitz (and a supplemental affidavit from Rabbi Breitowitz as well), the defendants argued that their conviction should be overturned for violating their religious liberty. And the argument goes something like this: freeing a woman trapped in a hopeless marriage is a mitzvah; and thus, federally prosecuting them for fulfilling a religious obligation violates their religious liberty. Indeed, the federal Religious Freedom Restoration Act (RFRA), which applies to all federal law—including federal prosecutions—does prohibit government from “substantially burden[ing] a person’s exercise of religion” unless that burden is the only way for the government to achieve something of paramount importance–what the law calls a “compelling government interest.”

Both federal courts hearing the case—most recently, the U.S. Court of Appeals for the Third Circuit—rejected the claim on two separate grounds. The ultimate result is surely correct, but one of the grounds advanced by the courts raises some serious problems for how we think about religion and religious liberty claims.

The first reason advanced by the federal court of appeals was that the burden on the defendants’ religious exercise wasn’t “substantial” and therefore RFRA, which only protects against substantial burdens, didn’t apply. In justifying this conclusion, the court reasoned as follows: “none of the defendants argue that they are unable to participate in the mitzvah of liberating agunot without engaging in kidnapping . . . [I]t is unclear whether all non-violent methods were exhausted before the alleged kidnappings took place here.” On one level, this seems relatively innocuous; the court is simply saying they should have tried something else to convince the husbands.

But when you scratch below the surface, you begin to realize there are some serious problems lurking. Can courts really figure out whether individuals, in pursuit of religious obligations, have other theologically sanctioned alternatives? For example, in 2014, the Supreme Court heard the appeal of a Muslim inmate seeking to grow a half-inch beard. The inmate’s claim had been rejected by a lower court because it concluded there was no substantial burden on religious exercise since the inmate “had been provided a prayer rug and a list of distributors of Islamic material, he was allowed to correspond with a religious advisor, and was allowed to maintain the required diet and observe religious holidays.” The Court rightfully rejected this argument as utter nonsense.

But courts persist in pursuing theologically contorted argumentation. In 2014, the North Carolina Department of Corrections rejected an inmate’s request for Torah study time because it mistakenly believed that Torah study requires a “minyan”—that is, a quorum of ten men. And so the Department of Corrections concluded, on Jewish law grounds, that there was no substantial burden on religious exercise because the inmate was not religiously authorized to study Torah with fewer than 10 men. In that case, the Supreme Court chose not to step in and correct the error.

Here’s the core problem. When courts try to determine who is entitled to a religious liberty exception to the law on the basis of theological substantiality—for example, by trying to parse the religious alternatives available under religious law—they invariably make mistakes. And those mistakes end up receiving the imprimatur of the law, both embarrassing the law and unjustifiably burdening someone’s faith. Indeed, these kinds of cases are precisely why RFRA, by its text, protects “any exercise of religion, whether or not compelled by, or central to, a system of religious belief.” RFRA does not want courts deciding whether or not to make an exception to the law by trying to figure out whether something is theologically prefered, theologically compelled or anything in between. That’s a job best left to theologians, not judges.

Of course, if this were just about legal errors, it might not be the biggest deal. Human judges are going to make mistakes. Unfortunately, there is something far more troubling at stake when courts try to assess the theological substantiality of a religious liberty claim. These kinds of mistakes are far more likely in cases where courts are evaluating the religious practices of minority faith communities—communities about whom judges may know far less and to whom judges may be far less sympathetic. Already, there is mounting evidence that the religious liberty claims of Muslims meet with far less judicial sympathy and are therefore far more likely to be rejected. If courts analyze religious liberty claims by trying to assess what alternatives are theologically viable, they are likely to impose their own expectations on the parties before them, increasing the likelihood that theological error, combined with religious skepticism, will lead to unequal treatment of minority faith communities.

So should the Get Torture Gang have won? Of course not. Even if a law substantially burdens someone’s religious exercise, it is still upheld where the law is the only way for the government to accomplish some sort of “compelling government interest.” Put simply, laws can override religious liberty if it’s the only way for the government to do something really important. And the Third Circuit emphasized that point as the second reason for rejecting the religious liberty claim of the Get Torture Gang: “the government has a compelling interest in uniform application of laws about violent crimes and that no other effective means of such uniformity existed.”

This second justification is as elegant as it is simple. Courts must decide when society’s interests are too important to allow for religious exceptions. No matter how strongly you feel about religious liberty, society can’t function if religious justifications can allow for the kidnapping and torture of others. In the end, religious liberty is only possible if it has limits that protect other fundamental interests of the public. And the court, in rejecting the claims of the Get Torture Gang, would have been best served focusing on this second reason. It would have put the court in the position of rejecting an extreme religious liberty claim based upon an assessment well within its expertise: what should count as an important government interest. That’s a far better place for a court to be than the alternative—attempting to traverse the treacherous waters of theology.