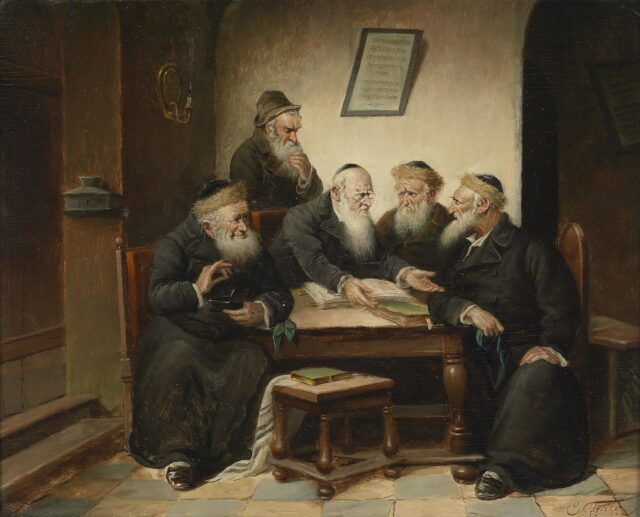 In his recent thoughtful essay, R. Ezra Schwartz notes a paradox: while shul life during COVID lockdowns became more decentralized, halakhic decision-making became more and more centralized. In the second part of his article, he pointed to the use of WhatsApp groups where rabbis shared best practices and most significantly turned to selected poskim for guidance on a myriad of issues. The written responsa to those queries were then communicated to hundreds, if not thousands of rabbis throughout the country. R. Schwartz clearly supports this phenomenon, as he writes, “The pandemic has brought forth a degree of centralization that has for too long been lacking or perhaps never before attained in Modern Orthodox communities.”

He notes some of its upsides, such as a shared sense of community among rabbis who often felt isolated in confronting their challenges, but then more significantly he writes: “Of equal, if not greater importance, the position of posek truly emerged in Modern Orthodox communities.” R. Schwartz celebrates this growing centralization of pesak in the Modern Orthodox community and hopes that it will outlive the country and our community emerging, please God, from the pandemic. Much of R. Schwartz’s insights resonate greatly and are very much on point. I, do, however, think that there are downsides to this phenomenon of centralization that we need to confront clearly and forthrightly.

But first let me start with a personal story leading to some reflections.

One afternoon in mid-2002, my phone rang, and when I picked it up, the familiar baritone voice on the other end said, “Shalom, Nati, it is Aharon Lichtenstein here.” After I gulped and gained my composure, my revered rebbe zt”l told me that he was in the process of collecting some of the essays he had written over four decades for publication (the volume came out in 2003 as Leaves of Faith: The World of Jewish Learning). He indicated that he was reviewing a manuscript of a lecture he had given in 1966 to the Rabbinic Alumni of RIETS-Yeshiva University and was considering including in the book. He asked if he could send it to me so that I and a few other students in avodat ha-kodesh would peruse it and give feedback on a number of points such as whether it was too dated to publish. The request, of course, took me aback, but was, of course, reflective of Rav Lichtenstein’s deep humility, as well as respect for his talmidim. I dutifully acceded to his wishes. The essay was eventually published as Chapter 6 of the volume mentioned above under the title: “Get You Wise Men: Marshalling the Rabbinic Alumni to Meet Contemporary Halakhic Problems.”

In that essay, Rav Lichtenstein chose to focus on the topic of personnel, and specifically how to develop a cadre of modern day morei hora’ah, rashei yeshiva, poskim, and high level lomdim to explore and handle the halakhic challenges facing the community. In that context, he included a passage about how we treat gedolei ha-poskim that has stuck with me for close to twenty years since first reading the yellowing typewritten manuscript and has re-emerged in my consciousness as this strange and challenging year has unfolded.

What opportunity do we allow them [gedolei ha-poskim] simply to think—or for that manner, to learn? How much of their time is truly theirs—to reflect upon both immediate and ultimate realities, to observe the present and relate it to a transcendent past and future? …

From personal observation I am familiar with the incessant jangle of the telephone in the Rav’s [R. Joseph B. Soloveitchik’s] home, and I gather from Rebbetzin Feinstein—as if one couldn’t have envisioned it—that the situation in her home is generally worse. I know that both the Rav and Rav Mosheh Feinstein are extremely conscientious about accepting she’eylot, answering them even when they might be inclined to decline other calls; and I have heard neither complain about this particular onus. Yet I cannot help but ask myself two related questions: How often have they had a train of thought interrupted by a call? … How many fleeting insights have gone the way of the latter part of “Kubla Khan”? … What the cost in unwritten essays and unedited hiddushim? Second, is their burden, indeed inevitable? Could not many, if not most of the she’eylot have been easily answered by men of lesser stature? Must every be’atha be-cutha [small issue] be referred to gedolei ha-dor?

Rav Lichtenstein then goes on to outline a series of proposals including creating regional centers where people of learning—but of the second and third rank—would handle questions that would not require the input of gedolim and only questions that truly reach the level of ha-davar ha-kasheh (very difficult matters) would be brought to the attention of the titans.

He then goes on to outline the benefits of this proposal and among them writes:

Second, such a program would provide fresh élan for the participating rabbis. It would challenge them intellectually and engage them communally. It would overcome the helplessness that many feel in attempting to bridge the gap between Halakhah and ma’asseh. And, of course, as an aspect of shimmush, it would constitute an invaluable apprenticeship for future first-rank poskim.

These words came back to me these last few months as we in the rabbinic community were presented with myriads of questions about how to practice Jewish ritual life in the face of the dangers unleashed by COVID-19 and the subsequent restrictions put into place to “flatten the curve,” save lives, and help ensure that our healthcare system not be overwhelmed and collapse. Thousands of communal rabbis throughout the world were asked by their congregants to opine on a wide range of topics, from the most serious to the relatively trivial. We continued to be asked for guidance as the Yamim Noraim approached and the many details of prayer and mitzvot associated with this auspicious time came to the fore. This phenomenon created a great surge in people exploring how Halakhah handles crises and what tools are at the disposal of a halakhist in addressing life lived in extremis.

Piggybacking on Rav Lichtenstein’s comments from fifty-five years ago, the issues he raised have emerged in our present situation. Since those early days leading up to Pesah 5780 when the whole world shutdown, I have dutifully followed the discussions on the various rabbinic listservs that I am on and reviewed many of the written halakhic decisions related to the effects of the coronavirus issued over the last year. There is no doubt that especially in the early stages of the pandemic and lockdown, many difficult and challenging questions emerged that required the halakhic expertise of gedolei ha-poskim and their broad shoulders. It was clear that questions of rationing lifesaving ventilators, triage questions of life and death, or permitted use of electronics on Shabbat and Yom Tov were questions that needed to be addressed by the highest echelons of the halakhic hierarchy. Indeed, I vividly recall a talk the recently deceased president of Yeshiva University, R. Norman Lamm zt”l delivered one Shabbat during the late 1980s when he visited Camp Morasha and I was working on the hinukh staff. In passing, he quipped that any rabbi who decided a halakhic question related to disconnecting a patient from a respirator without consulting with a senior talmid hakham and posek would have his YU semikhah retroactively revoked!

However, many of the questions that were raised and addressed hardly rose to that level of complexity and challenge. And yet, those questions too were automatically forwarded to leading poskim. Just as one saw communal rabbis turning to leading rabbinic decisors to address whether donating plasma on Shabbat to help Covid patients was permitted under the rubric of the dispensation of pikuah nefesh—saving a life—another rabbi posed the question of whether to skip yekum purkan while praying privately at home to that very same posek. And the dissonance of the juxtaposition felt sharp and clear.

Echoing Rav Lichtenstein’s words about how not all questions are of equal difficulty and significance, one immediately wondered if the question of whether one can skip some of the pesukei de-zimra or anim zemirot to abridge services during these times, whether one needed to make up parshiyot that were missed when shul was closed, or whether one could open the ark with gloves on really required the attention of gedolei ha-poskim. Were rabbis of the second, third, and fourth tiers not capable of handling these questions, many of which are explicit in the halakhic codes and their commentaries?

As Rav Lichtenstein noted, this practice and modality of dealing with halakhic queries, in addition to diverting the time and attention of the leading lights away from more pressing issues and research, undermines the ability of younger and developing rabbis to grow in their learning, achieve greater heights, and become more serious and experienced halakhists. Moreover, it deprives them of the ability to step up and lead their communities with responsibility and confidence. Finally, it bespeaks a certain lack of confidence in the lower echelons of the halakhic hierarchy and makes people too dependent on turning to one or two figures on all matters.

Also, this approach can swing the pendulum too far in the direction of concentrating halakhic responsibility and direction in the hands of only one or two figures, a centralization that has costs: it can undercut local authority and homogenize halakhic practices when an issue may be better suited to a multiplicity of approaches depending on local circumstances and the needs of the specific questioner. In addition, it can perhaps create too much dependence on one figure, great as he may be, which could foster a potentially unhealthy relationship of control and deference to authority even in situations where it is not warranted. The failure to inculcate an appropriate measure of autonomy for communal rabbis and encourage younger halakhic voices can undermine a rabbi’s relationship to his community, to the ultimate detriment of his ability to implement and connect congregants to halakhic norms.

A great deal of halakhic creativity and vitality has emerged as Jewish law has confronted the challenges that have emerged in 2020. It would be a pity if developing the expertise and independence of younger talmidei hakhamim and communal rabbis—while of course still allowing gedolim to address the most novel and difficult issues—was not fostered and developed in the midst of this crucible.

A Letter about Covid