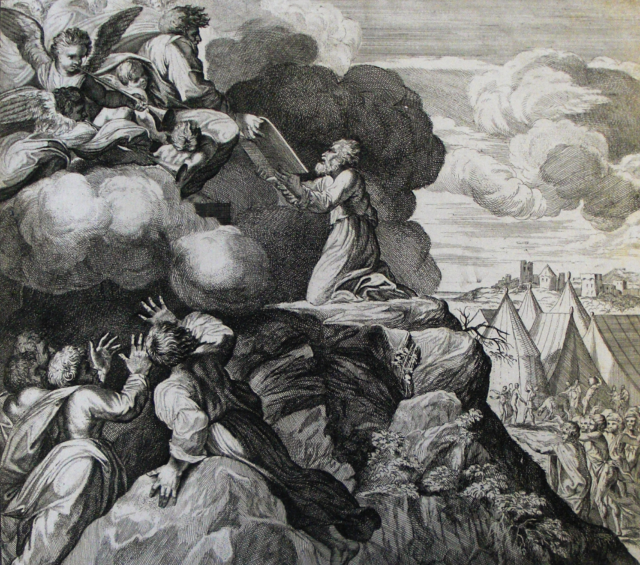 Abraham Lincoln knew his Bible, mostly. As a child, he listened to his mother recite Psalms as she worked.[1] During his early career as a lawyer, a dying – but particularly pious – client asked Lincoln to read some Scripture after composing her last will and testament. Her children brought out the family Bible, but instead, Lincoln quoted Psalm 23 and Jesus’ farewell address (John 14:1-4) by heart.[2] Occasionally, however, his plastered cistern of a memory for biblical passages would leak.[3] In his final 1858 debate with Democratic senator Stephen Douglas, Lincoln said: “The Bible says somewhere that we are desperately selfish. I think we would have discovered that fact without the Bible.”[4] No single biblical passage captures Lincoln’s claim. Perhaps he intended to cite James 3:16, 2 Timothy 3:2 or the commandment “Thou shalt not covet.” These verses are oblique references at best. But must Lincoln cite the Bible verbatim for his message to be biblical? A broader view of the word “Bible” will allow us to be more charitable to Lincoln than Douglas, who once, according to Lincoln, called him “a poor hand to quote Scripture.”[5]

Lincoln’s scriptural pseudo-quote – a citation based on the Bible but not quite found on its pages – prefigures that of yet another leading politician. On at least twelve occasions between 2002 and 2019, Nancy Pelosi attributed the following piece of wisdom to the Bible: “To minister to the needs of God’s creation is an act of worship. To ignore those needs is to dishonor the God who made us.”[6] At best, this saying alludes to Proverbs 14:31 in the Good News Translation: “If you oppress poor people, you insult the God who made them; but kindness shown to the poor is an act of worship.” Nonetheless, at the 2019 Annual Council for Christian Colleges and Universities Conference, Pelosi admitted: “I can’t find it in the Bible, but I quote it all the time,” and “I keep reading and reading the Bible—I know it’s there someplace. It’s supposed to be in Isaiah …. It’s in there somewhere in some words or another, but certainly the spirit of it is there.” If we maintain a narrow understanding of the word “Bible,” one that limits its message to the black glossy letters on its sterling white pages, we would conclude that “the misquote is simply indication that Speaker Pelosi has no clue what is in the Bible”[7] and side with those who read Pelosi’s error as evidence of biblical illiteracy.[8]

An expansive understanding of “Bible” and “biblical” will also allow us to put into a more generous and revealing light the misquotes of two contemporary vice presidents. In September, a few months before being declared the winner of the presidential election, Joe Biden recounted his meeting with Jacob Blake, a man shot by the Kenosha police department, claiming that they discussed something “based on the 23rd Psalm: ‘May He raise you up on eagle’s wings and bear you on the breath of dawn until we … And keep you and hold you in the palm of His hand until we meet again.’”[9] These lines do not come from Psalm 23. Instead, they consist of the refrain of Michael Joncas’s 1979 church hymnal “On Eagle’s Wings” – itself based on Psalm 91– stitched together with an Irish prayer: “Until we meet again, may God hold you in the palm of His hand.”[10] Biden’s reference falls well beyond the printed and bound Holy Bible. But is there more to this story than just another moment of “brain freeze”?[11]

Misattributing text to the Bible has not passed over the party of the religious right. Bob Woodward, in his most recent book, summarizes the following piece of wisdom that Mike Pence delivered to Dan and Marsha Coats: “Pence recounted the Old Testament story of David, who was hiding from King Saul in a cave when God sent a spider to weave a web across the cave opening. On seeing the web, Saul did not enter the cave. The spider had concealed David’s presence and saved his life. The story showed that even a spider might be an instrument of great salvation in the hand of God.”[12] Open a Bible and flip through the books of 1-2 Samuel, 1-2 Chronicles, and Psalms. This story will not appear on its pages. It exists, but as a piece of Jewish folklore recorded for the first time in an early medieval Hebrew text called The Alphabet of Ben Sira.[13] According to this story, David questioned the utility of insects such as the spider. God teaches David a lesson about gratitude and divine forethought by using a spider to conceal his position and save him from certain death. Where Pence first learned about this tale I cannot say. Perhaps a copy of The Little Midrash Says, now encased in dust, sits on his childhood bookshelf. In any case, I believe that we can appreciate Pence’s mini-sermon beyond the textual confines of the category of biblical literacy.[14]

Did Lincoln, Pelosi, Biden, and Pence misquote Scripture, the written (scriptus) text of the Bible? On hyper-technical grounds: yes. Do their errors come from senility? Are these mistakes just additional datapoints on a scatterplot showing the unfortunate decline in biblical literacy? I think not. It is all too easy for us to accept a narrow understanding of the word “Bible,” to view it as a single book of 24 (or more for Christians) unchanging texts. Accordingly, any direct reference to it that does not replicate the words on its pages must signal memory failure, a comic error of cosmic consequences.[15]

At least two historical forces bequeathed the legacy of viewing the Bible as a singular sacred text to the American public,[16] a society fond of citing biblical literature within the public sphere to make political and moral arguments. The first is print culture, which ultimately stabilized – and some might say monotonized – a dynamic textual tradition. Its crown jewel, the Bible from which Lincoln most often cites, was the 1611 King James Version – a doctrinal statement for the Church of England and a political charter garbed in the authoritative cloth of biblical translation.[17] The second is the Protestant-dominated approach to the Bible, which demands that a written and unchanging text stand on its own (sola scriptura) as the primary source of religious meaning and authority: if one cannot find the idea within the confines of the written Word, it lacks the biblical Spirit.

The technical errors of Lincoln, Pelosi, Biden, and Pence point to a more textured, nuanced, and rich understanding of the word “Bible” that has flowed as an undercurrent within American culture. We can best unpack this perspective through the Bible’s Hebraic equivalent: the word Torah, which outsiders often infelicitously translate as “the Law.” Torah is anything but a simple lawbook. Torah signifies a) the physical scroll that contains the five books of Moses (sefer Torah); b) the entire 24-book biblical canon (the “Written Torah,” Tanakh); and c) the sum total of all of Jewish wisdom and learning (the “Oral Torah”), which continues to grow as the present becomes the past. In modern parlance, the word acquired yet another useful meaning: d) a way of life inflected by Jewish religious values, i.e. “Torah Judaism.”[18] And the word Torah operates on all four definitional levels at the same time, as Hasidism continues to demonstrate with its clever – and sometimes disturbing – feats of (de)constructive biblical interpretation.[19]

This expansive Jewish view of Torah does not confine authority and meaning to the written text alone.[20] The Jewish “Torah” does not accept the limitations imposed by print or Protestantism. And neither should the American “Bible.” Instead of sneering at the decline of biblical literacy and mocking the mistakes of others, we should be charitable and encouraging. We should support a more dynamic view of the word “Bible” and what it means to say that something is “biblical.” In this view, the Bible should certainly refer to a specific group of texts, printed and bound. We cannot allow conceptual fluidity to devolve into complete relativism. But at the same time, the word Bible must also signify that book’s iconic status, its ability to stand in as a symbol for a much broader tradition: its history, words, material manifestations, and successive layers of intellectual and cultural interpretations.

With this understanding of “Bible” and “biblical,” let us place into context the errors explored above. Each misquote entwines most of the four views of “Torah.” At the same time, each highlights a different degree of expansion beyond the written text. Biden misattributes a liturgical composition to Psalm 23. This worship hymn, however, originates with a biblical Psalm. Perhaps we may excuse Biden by noting that his reference to Psalm 23 simply stands in for a work “based on” – to use his own words – the Psalter. His reference points to an extended biblical canon, one that includes biblically-inflected liturgy. Pence cites a Jewish midrash as biblical. In this manner, he reads the Bible as many Jews do, through theological lenses tinted by a millennia-old oral tradition. And finally, Lincoln and Pelosi quote phantom verses, intangible words that elude the fixing grasp of the biblical text. Yet they certainly emanate from a biblical ethos, a way of life that demands one reflect on selfishness and “minister to the needs of God’s creations.” These are good – and divine – messages.

Have I merely spun apologetics and justified the active abuse of sacred literature? Perhaps, if we take this argument too far. Not every technical misquote should be lauded or tolerated. And sometimes, mistakes are simply errors. But, in an era of hyper-partisanship, where it is easy to dismiss content based on anything other than reasoned thought and active listening, I believe that we must double-down on charitable assumptions. Before “hissing and wagging our heads” (cf. Lamentations 2:15, Psalms 22:7) at those who “improperly” use the Bible, we should raise as a starting point the eternal banner: eilu va-eilu divrei Elokim hayyim.

[6] Quotes of Pelosi are from here, here, and here.

[16] Although he does not deal with America, James Simpson describes the pressure that these dual forces exert on modernity in Burning to Read: English Fundamentalism and Its Reformation Opponents (Cambridge, Mass.: Harvard University Press, 2007).

[18] See, for example, its use here, as well as the chapter in the Rav’s Kol Dodi Dofek titled “The Obligation of Torah Judaism to the Land of Israel,” and the product description of an ArtScroll Introduction to Judaism.