Recently, Jewish news sites reported that 44 rabbis in Israel challenged the Beth Din of America’s halakhic prenuptial agreement. But did they? Really? Despite what we read in the headlines, the answer is no, not really.

First, some background. There are three different prenuptial agreements referred to in various statements in this rabbinic proclamation: Beth Din of America’s (BDA), Tzohar’s and Na’amat’s. The BDA’s prenuptial agreement was authored by Rabbi Mordechai Willig in 1992, and has been endorsed on several occasions by the Rabbinical Council of America in the intervening 25 years. Most notably, last September the RCA required all member-rabbis to utilize a halakhic prenup whenever they officiate at a wedding.

In 2015, Tzohar, the most prominent association of Religious Zionist rabbis in Israel, introduced its own halakhic prenup, based upon the Agreement for Mutual Respect that had been introduced around the year 2001 by Rabbi Dr. David Ben-Zazon, Rabbi Elyashiv Knohl, and Rabbinical Court Advocate Dr. Rachel Levmore. Na’amat, a women’s advocacy organization in Israel, proposed a prenup which was authored in the mid-1980s by the late Professor Ariel Rosen-Tzvi. At the time, the Israeli Rabbinate rejected the Na’amat proposal outright.

There are significant distinctions in the language and legal mechanisms that are utilized by these prenuptial agreements. The Na’amat prenup is fundamentally different than the BDA or Tzohar versions. The Na’amat prenup contains a clause which legally prevents a spouse from granting jurisdiction to the rabbinical courts over the matters ancillary to the get process, namely, finances and custody. It is no wonder why the Israeli Rabbinate thoroughly rejected a prenuptial agreement which eliminated their ability to fully adjudicate the divorce process.

The BDA prenup and the Tzohar prenup share much in common and—unlike the Na’amat version—do not curtail the authority of the rabbinate. Both agreements create a financial support obligation on the part of the husband (and, in certain versions, on the part of the wife as well), which an aggrieved party can collect upon in the event of the other party’s recalcitrance. In other words, if a husband refuses to issue his wife a get, the wife can collect substantial financial support from him until he decides to free her from the chains of a dead marriage. This support obligation creates a serious financial disincentive for the husband to persist in his recalcitrance. It is critical to note that this mechanism is based upon a halakhic obligation of spousal support that exists throughout a halakhic marriage and is not a penalty.

While the difference between “support” and “penalty” may seem like semantics, from a halakhic perspective the two mechanisms could not be more dissimilar. An agreement that creates a financial penalty against a recalcitrant husband is fraught with halakhic concerns and pitfalls which may invalidate a get when induced through such pressure. In contrast, an agreement based upon spousal support is rooted in a husband’s fundamental legal obligations towards his wife, which are even stated explicitly in the ketubah. Such a prenup creates an enforcement mechanism for those obligations, which is very useful in inducing the issuance of a get in the event that the husband becomes recalcitrant.

The primary question at hand is whether the mechanism of the Tzohar and BDA prenups—enforcement of spousal support—induces a halakhically valid get. Is that the question that these 44 rabbis addressed?

Over the past two years, there has been an effort by Rabbi Pinchas Shapira of Beitar Illit in Israel, to gather letters of opposition to halakhic prenups from various rabbis in Israel and to publicize such opposition. The first salvo came in August 2015, with a letter authored by Rabbi Moshe Sternbuch that opposed the BDA’s halakhic prenup. Rabbi Sternbuch’s letter can be distilled into three primary arguments: First, a get may likely be invalid if it is issued due to a penalty stipulated in a halakhic prenup. Second, the amount of spousal support that the BDA stipulates in its halakhic prenup, $150/day (roughly $55,000/year), is well above cost-of-living and must therefore be construed as a penalty and not spousal support. And third, halakhic prenups increase the incidence of divorce.

Rabbinic advocates of the BDA prenup might readily agree with Rabbi Sternbuch’s first contention: that a halakhic prenup that is based upon a penalty is halakhically problematic. However, the BDA’s prenup is based upon spousal support and not a penalty. Therefore, his first argument does not apply to the BDA prenup.

Rabbi Sternbuch’s argument—that the amount of $150 per day is punitive because it is well above standards of support—is simply not grounded in the economic realities of American Jewish life. In terms of his third concern, that halakhic prenups will increase the divorce rate, a recent study demonstrates that there is no increased consideration of divorce for couples who signed a halakhic prenup.

While the recent proclamation has been released to the public as one unified document, it is in fact an extensive cut-and-paste job, drawing upon several different letters and proclamations. The final product is neither cogent nor coherent. 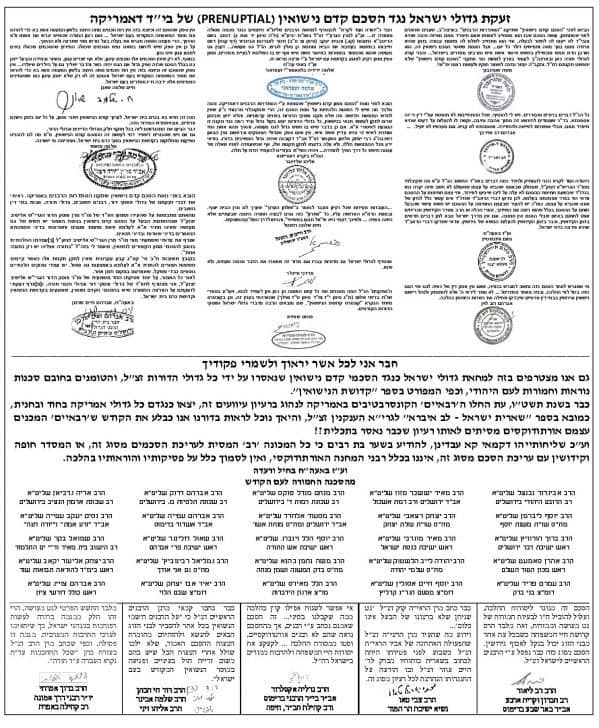 The proclamation divides into three parts. The first signatory in the top third is a quote from Rabbi Sternbuch’s 2015 letter and 11 signatories who endorse Rabbi Sternbuch and/or his arguments.

The middle section is comprised of a list of 25 rabbis who endorse the rabbis listed in the top section. Since the vast majority of signatories rely on Rabbi Sternbuch’s arguments, if Rabbi Sternbuch’s letter fails to pose an effective challenge to the BDA prenup then this proclamation utterly falls apart.

The bottom row of eight signatories is a mixed bag. Half of them refer to the Na’amat proposal and fail to make any distinction between the halakhic mechanics of that agreement versus the BDA or Tzohar versions. Another signatory, Rabbi Dov Lior, has endorsed a ruling that seemingly approves of the mechanism of the BDA prenup, so his signature on this proclamation would challenge only the Tzohar prenup and not the BDA prenup.

The title at the top of the proclamation, “A Cry from Gedolei Yisrael Against the Beth Din of America’s Prenuptial Agreement” is terribly misleading, since it implies that all 44 signatories object to the BDA’s halakhic prenup. That is demonstrably false.

The final signatory, Rabbi Baruch Efrati, cites the late Rabbi Joseph B. Soloveitchik in the full text of his contribution to this proclamation, arguing that the Rav would have rejected the Tzohar and BDA halakhic prenups on the grounds that the Rav railed against the application of annulments to resolve agunah cases. Rabbi Efrati provides no explanation for why the Rav’s objection to one halakhic tool would imply his rejection of another. (It is worth noting that Rabbi Hershel Schachter, arguably the Rav’s most prominent student alive today, strongly endorses the BDA prenup.)

Interestingly, the 25 rabbis in the second section of the proclamation state that any rabbi who endorses “these” halakhic prenups is not an Orthodox rabbi. In their eyes, therefore, the following rabbis are not or were not Orthodox: Rabbi Dovid Cohen, Rabbi Zalman Nechemia Goldberg, Rabbi Hershel Schachter, Rabbi Gedalia Dov Schwartz, Rabbi Asher Weiss, Rabbi Ovadia Yosef, Rabbi Chaim Zimbalist, and the thousands of whom-we-thought-were-Orthodox rabbis who have utilized rabbinically-sanctioned halakhic prenuptial agreements over the past two decades.

One might also include all 1,000 member-rabbis of the Rabbinical Council of America, since they are members of a rabbinic body that has not just endorsed but required the use of halakhic prenuptial agreements. Furthermore, since Rabbi Schachter is not acceptable to these 25 rabbis yet he remains the halakhic authority for the Orthodox Union’s kosher certification, presumably these rabbis do not eat any OU-certified products.

I wonder whether the architect of this proclamation intended for the specifics to be read. A clear, legible version is not publicly available. The goal, it seems to me, was to create a glaring headline, and, in the process, pull the wool over the eyes of the public.